Lately, I've found myself in the mood for trying some new things in the meal department and being that I DO have a board of Pinterest recipes just waiting to be explored I jumped on it. ;o)  Two new favorites were discovered:

#1 Pot Roast Sliders Josh loved these and told me he would pay for them at a restaurant.  I have a similar recipe (no salsa though) for slow cooker French dip and he liked these sliders even better.  Part of what makes them so tasty is the horseradish sauce.  My mom made a similar sauce when she would serve pork roast and Josh has always loved it.  It gives a nice little kick to your sandwich.  The downside to this recipe would be how expensive a nice sized beef roast is these days.  While I haven't tried this recipe with a pork roast, I have used them in place of beef roast from time to time (like in French dip).  The results are a bit different, but still tasty.

#2 Southwestern Egg Rolls These were a hit with pretty much my entire family!  They were so good that all I can think about is making them again.  I "kind of" doubled the the recipe--I kept the seasoning amounts the same but put in the extra large can of black beans, a full 12 oz bag of frozen corn, a full bag of baby spinach, and 4 chicken breasts.  It is one those recipes where the exact measurements aren't a big deal.  While it wasn't a "dump it in a pot and bake it" kind of meal I did find that my extra filling was just as excellent rolled into tortillas a day later and baked.  It is definitely a meal where you could get the prep out of the way in the morning or even the night before and then just roll up your little egg rolls and bake them.  And be sure to serve them with Cilantro Cream Sauce! But if you were pressed for time I think mixing up some salsa and ranch would suffice (or maybe just ranch for little kids). 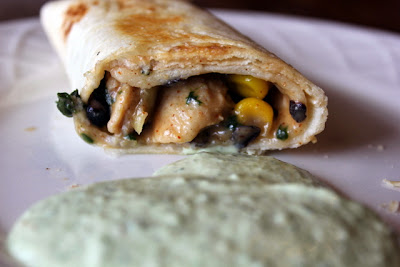 And then I have this awesome dip to share:
ESPINACA
2 8 oz packages of cream cheese
12 oz hot pepper cheese
4 oz frozen spinach (I usually add in a bit extra)
1 onion chopped (I usually leave it out because Josh isn't a fan)
1 can rotel, drained
1 cup heavy cream
2 chicken bullion cubes

Throw it in a pot over medium heat until melted and combined (around 20 minutes), stirring periodically to make sure the bottom isn't scorching.  Or just put it in your crock pot.  Here is a picture of the cheese I use (usually find it at Walmart in the refrigerated section where all the Mexican/Italian cooking items are). 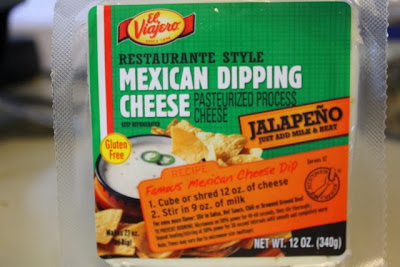 Serve it up with some tortilla chips.  The leftovers keep great in the fridge as well.  If you have any. ;o)  I think I could live off of this indefinitely . . .

The sliders sounds good. The recipe is almost identical to the one I use out the blue IHCC cookbook for French Dip (the salsa is the only different ingredient). May have to try that as a change. My boys *love* French Dip sands. but it doesn't make the rotation b/c I agree on the price of a roast! I try and keep my eye open for some manager specials.

YUM!! Thanks for the inspiration...delicious winter food. :)