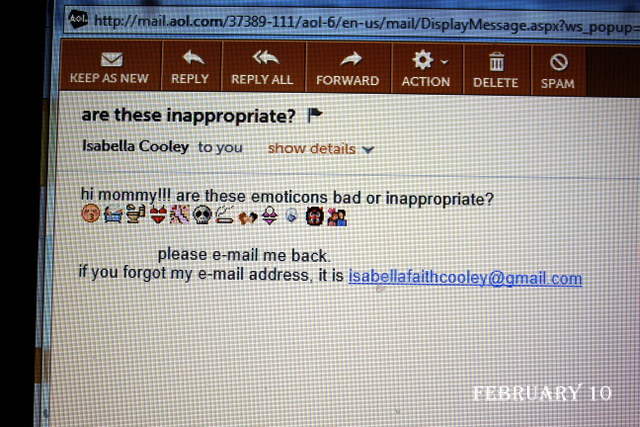 My girls got email addresses at Christmas-time to go with their shared (Wal.mart black Friday deal) laptop.  Isabella was excited to discover her gmail account has emoticons.  I told her to use the emoticons wisely and not to use any that would be inappropriate.  Here's the first email I get from her--checking if I thought the kissy faces, bikinis, toilets, skulls, lit cigarette (etc.) emoticons were bad.  I emailed her back that she had found the ones I didn't want her to use. Oh that girl.
~﻿ 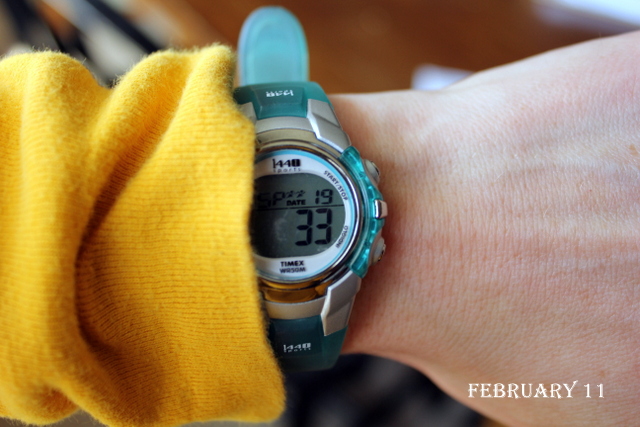 I don't always run with a watch, and in fact this is only the 2nd time I slapped one on this year.  I run for the sheer euphoric feeling of running (did you all just gag a bit??). ;o)  Anyway, I was surprised and delighted to discover I had gotten a wee bit faster since last year, running four miles with an average pace of 8:33!  My half marathon pace last year averaged out to be 9:07.  Now I have no idea if I could maintain 8:33 over the course of 13 miles, but I have a new goal to shoot for.  We'll see.
~ 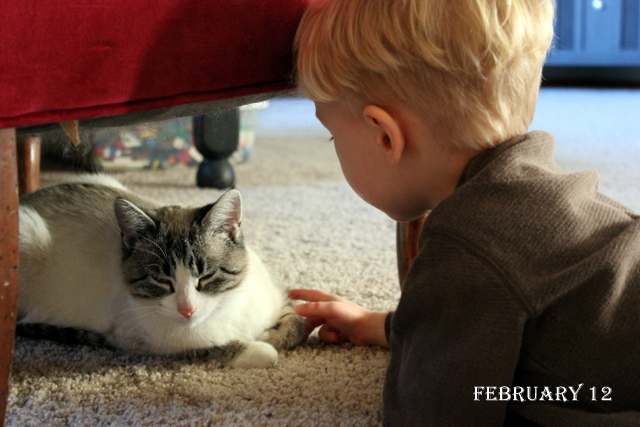 Oh, the kitty.  She spends more and more time inside, often curling up to sleep under her favorite wing back chair.  Josh has totally spoiled her.  And we have a feeling she might be growing us some more kitties . . .
~﻿ 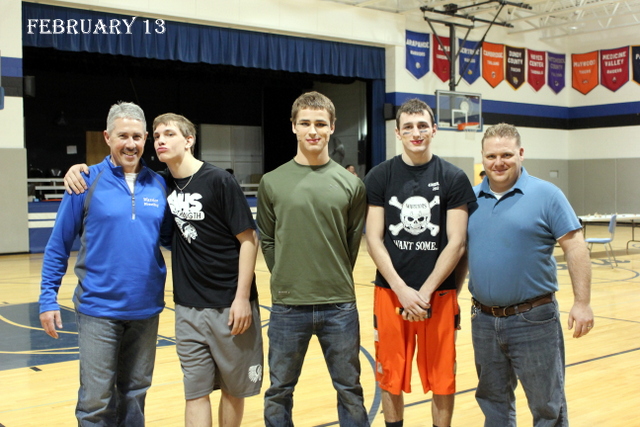 We went to the pep rally to send off Josh, his assistant coach, and the three wrestlers to the state tournament.  Now, his wrestlers don't always wear make up--the cheerleaders had them put on a fashion show as part of the pep rally entertainment--the other high school boys made them up, they had to wear dresses, and then walk the "catwalk."  I'm sure it is how every wrestler would like to be sent off.
~ 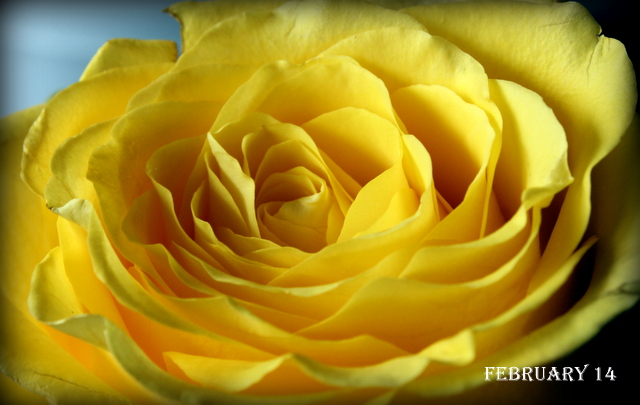 A pretty yellow rose (my favorite--they were in my wedding bouquet) delivered for Valentine's Day.  We're not big "V-Day" celebrators.  (In fact that morning I had texted him joking about the absence of my dozen roses).  But it was nice to be thought of while he was away in Omaha. ;o)
~﻿ 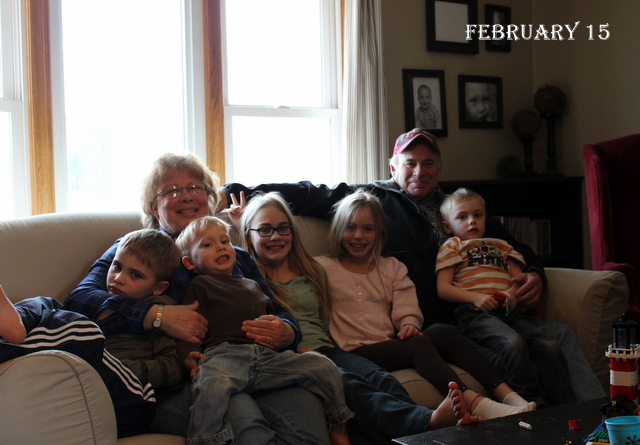 My parents drove out for the day to hang out with me and the kids and break up the time with Josh gone.  We feasted on chili and cinnamon rolls, watched a documentary about Sequoia National Park, and my mom and Isabella visited the quilt shop.  It was nice to have some adult interaction. ;o)
~ 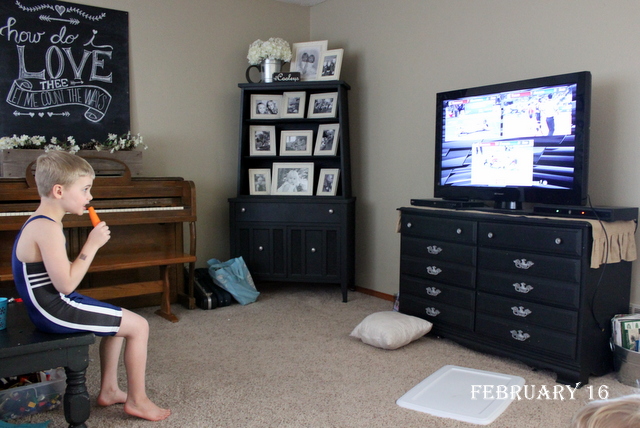 Because you have to put on your singlet to watch the state wrestling tournament. ;o)
We were all thrilled that two of Josh's wrestlers made it to the championship matches.  They both ended up placing 2nd.  The kids loved getting to see Daddy on tv. ;o)  The last time I watched state wrestling on tv was when this cute blonde junior in my church youth group won himself a 1st place medal.
A few years later down the road I married him. ;o)

the picture of Jackson watching the matches is great. love how boys always feel the desire to be a part of what dad it doing.

Love these pics. :) And way to go running! I especially love the close-up of the rose (WOW)...and fun to hear about the state wrestlers and their awesome coach! :)

Yes, I did gag. I think you have "euphoria" confused with "malaise". ;-) Congrats to Josh and his boys! Your new chalkboard art is lovely too...

Love your rose and the fact that Josh remembers yellow is your favorite. It's those little things that mean so much! Yay for getting faster in running--which only means you'll have to wait even longer for me at the finish line this year. ;) And I, like Brooke, noticed the chalk board art and *loved* it!

You really watched that little idiot at the state wresting tournament? You guys are very cute... yellow roses while he is away? He's getting there, huh? Jackson is adorable.

When he was in high school, just to clarify.