#1 Back in December I determined I needed a secretary (of the desk kind, with the fold-down cupboard to hide the desk part).  I located one on Craigs.list whose shape I was rather fond of . . . unfortunately they were asking $175 (much more than I was looking to spend).  Over the next week or so I watched it, and just as we were getting ready to head back to Lincoln for Christmas the price dropped to $125 (still too much, but getting closer).  I asked Josh to check on it for me.  Josh emailed the guy and half-heartedly offered him $50 (he didn't exactly share the same "secretary vision" that I had), the guy said "No" and so Josh countered with a $75, certain it was a lost-cause.  The guy said "Sold."  (And Josh thought, "Drat.")  So, Josh and his dad drove to the far opposite corner of Lincoln to get it for me.  It had to remain in Lincoln because there was no room to shove it in the minivan with the seven of us, however, this past weekend when Josh' parents came to visit it they brought it out to me.  And I cannot wait to get to work making it pretty! 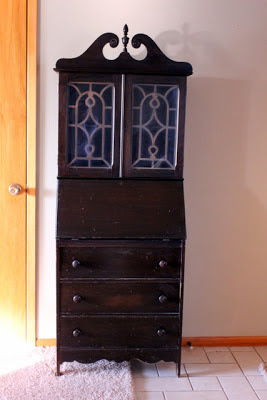 #2 Last year I good-naturedly teased Marissa about out-reading her (there may have been a bit of dancing and me exultantly singing, "I'm winning!!), well, I noted her book list today . . . so far up to 12 and me sitting with a big fat zero.  It would seem she is determined there will not be a repeat of last year. (I have three books in the works, but apparently diversifying my efforts is not helping the cause).

#3 I sent Josh's cell phone through a 40 minute wash cycle in the washing machine.  And actually, it began a round in the dryer before I heard a couple of strange thuds and went to investigate.  If you recall, last year we were supposed to upgrade to smart phones.  Unfortunately, there was a delay in the Amazon shipment, and as Amazon delayed Josh had time to contemplate and ponder his purchase, coming to the conclusion that we didn't need smart phones.  He cancelled the order (and he hasn't since gotten the urge to repurchase). All I have to remember that hopeful time of my life is this aqua blue phone cover, (the order that DID get delivered in a timely manner): 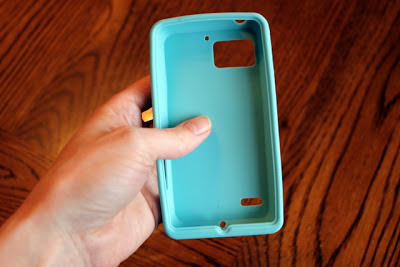 (Sometimes I get it out and pretend . . .) ;o)
So, as I removed his water-logged and beat up cell phone from my dryer, dutifully taking it apart and sticking it in a bowl of rice I was (inside) doing a bit of a euphoric happy dance. "I'm so sorry Josh, I think I have officially killed your phone.  I guess we'll HAVE to get new ones now."  You can only imagine my horror when he called me this morning from school, his voice exultantly triumphant asking, "Did you see what phone I'm calling you on?" I may have had a bit of a Rumpelstiltskin moment.  (You know the one, right? When the princess informs him of his name?  Anybody??)

#4 In the 2+ years I've had my laptop I've never removed picture files from it--we've backed them up and all but I never deleted.  And then a few days ago I discovered I only had 318 MEGAbytes of available memory left.  I removed all the files up through July of last year . . . it was something like 13,000 and some items . . . 84 GIGAbytes of space available now.   That should help things run a bit smoother perhaps??

#5 Last night's Downton Abbey anybody?? (SPOILER AHEAD!!)  Anybody else utterly horrified they killed off Cybil?  Watching that scene . . . oh it was awful!  And as I sat there, contemplating the sisters having to say good bye to their sister, I thought of my own sissy.  Let's just say she got a weepy email me from me last night professing my undying love and affection.

#6 Since moving out here I have been unable to locate a store that sells my favorite tea "Bigelow Vanilla Caramel."  Back in Lincoln I always could find it at Super Saver, and so I've been having to wipe out the store shelf when I come back for a visit.  And then I discovered Amazon has it, and I can subscribe and save, so every three months I shall be delivered six boxes and I shall never be in want again. (It's not the only tea I drink, but it is the one I seem to forever love . . . sometimes I change things up ('cause I'm wild and crazy like that) with an Irish or English Breakfast tea, sometimes the Bigelow French Vanilla, and of course a tasty Chai Latte for a special treat . . . generally speaking, tea and I shall be BFF). ;o)  Anyway, can't find something on the shelves, check Amazon--they never cease to amaze me!

Oh dear, husband saves phone. Maybe next time? ;-) Your new secretary is beautiful, I can't wait to see how you transform it. And I fear you may have created a reading monster...that's what happens when we book-ers get taunted. ;-)

my sister accidentally ran over her phone with a mower once. can't fix that with a bag of rice. ;)
so excited to see what you do with the secretary.

I *LOVE* the secretary! What a great buy and I cannot wait to see what you do with it. Are you thinking of trying milk paint? It's going to be so lovely!! I think having a smart phone would be nice, too until I think of paying for it every month....so I'll hang out with you in "dumb phone" land. ;)

The secretary is beautiful! And what a great deal...love hearing your life tidbits. The tea looks yummy...and I hope your phone cover will have an occupant someday! ;) ...perhaps Sarah is on to something with the mower trick.