Oh, Christmas-card-picture-day where I chase the elusive "perfect" shot.
The day Josh utterly despises as I drag him along, directing him willy-nilly down gravel roads, telling him to get the kids to smile, and subsequently getting disgruntled with him when they are "guffawing" in every picture.
Good times, always. ;o)
This year I had to find a new abandoned farm--I discovered a few months ago the one I used last year had been completely bulldozed, flat as a pancake!  (Good thing I have pictures so it will forever live in infamy . . .).  Lucky for me it would seem abandoned farms are easy to come by out here. ;o) 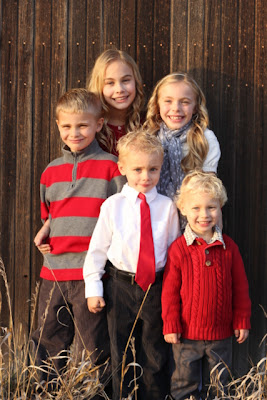 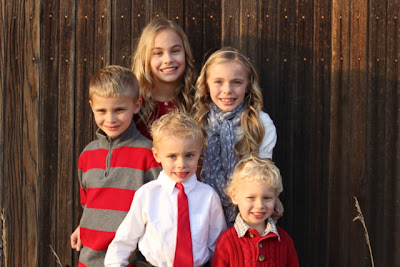 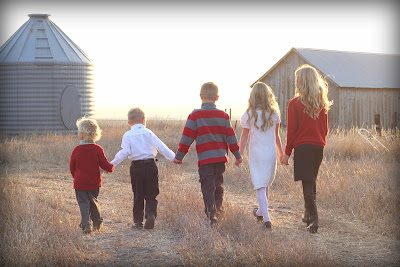 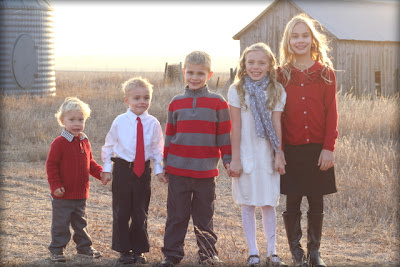 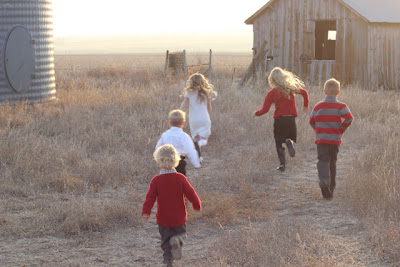 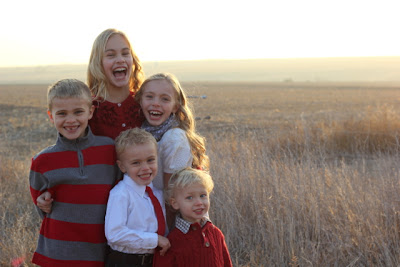 And there you have it.  In the end I used pic #2 as it worked best with the card layout I found on Snapfish (taking advantage of the 60% off card deal they were running last week!).  I've got notice that they shipped already! I'm feeling quite ahead of the game. ;o)  Which is good, because that's the only Christmas-y thing I've managed so far, well, other than spruce up all of our Amazon wish lists.
Does anybody else keep a year-round Amazon list or am I weird that way?

I love #2' but I love them all. Such a sweet family that I feel apart of because of your blog. I, too, have my Christmas cards. But, not because I am "with it" but because Natalie took a family picture this summer and because she ordered them for me. Free, no less! So thankful for my two daughters who take care of their Mama!
The abandoned farm, what a great back drop for the photos.
Mimi

What wonderful pics! I am in awe of you getting all five children even looking at the camera let alone smiling. My two foil my attempts all the time. And no, you're not weird, our amazon lists are year round things as well.

Janna, these are beautiful shots! Love them all...beautiful kids--and perfect stairsteps to boot! :) Congrats on a wildly successful picture session. ;)

These are so adorable! I love the last one especially. I also love the fact that Emmett is wearing a tie.

And no, you're not the only one that keeps a year-round Amazon list... :-) I think mine is a couple pages long!