Where am I? Day four? ;o)
That afternoon we met up with Josh's parents in Springfield, MO and dined at Carlos O'Kelley's and then followed them to Branson, to the Honeysuckle Inn. 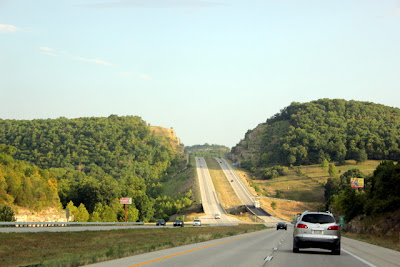 (that would be Josh's parents, directly in front of us) ;o)
Friday (Day 5) we made a last minute decision to tour the Titanic Museum.  It was more a "my kind of thing," but the other six happily came along.  I'm not sure it ended up being $67 worth of fun, however I really enjoyed it.  They don't allow pictures inside, hence you'll just have to take my word for it.  The highlight for the kids? Touching an "ice berg," sticking their hands in 28 degree water and seeing how long they could last (FYI--that is really cold water!), and standing on a slanting boat section to see how slippery it would be.  I think to fully appreciate it, you need to be able to read all the fascinating accounts, which isn't going to appeal to the younger set of kids. 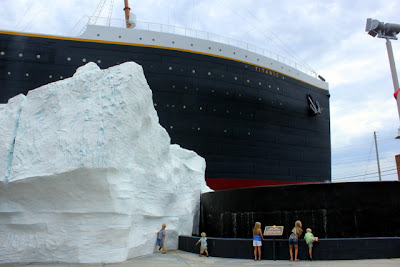 We each got a boarding pass of an actual person on the ship.
Everyone but Owen survived. :o(
~
Our Branson schedule was much more relaxed--we were there for a family reunion on Josh's side.
There was a lot of "hanging out."
On Saturday a friend of Josh's uncle took interested family members out for a boat ride across Table Rock Lake.  I forget that the girls were itty-bitty the last time they were on a boat, so really, it was a new experience for them all.  And it was a hit!  Just goes to show that more often than not "free fun" can be the best kind of fun! 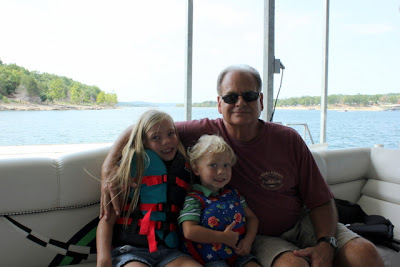 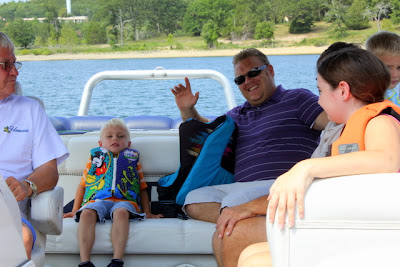 Sitting in the back, under the shade. 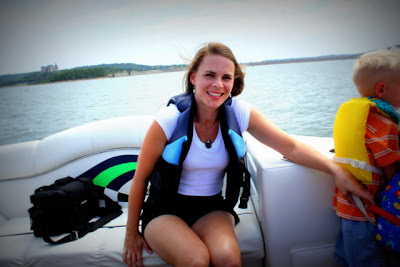 Me, looking casual, while fearing my youngest was going to bounce right off the front of the boat, get run over, and subsequently chopped up.  I had a good grip on that strap--a fact Owen let me know {often} he was not happy about. 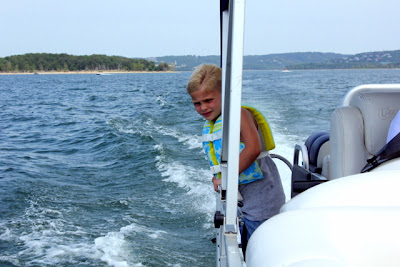 And Jackson, reveling in the ride.
Marissa kept her perch at the front of the boat for the entire ride, soaking it all up.
Emmett got to help steer for awhile.
A good time was had by all. ;o)
That evening was the official dinner with the whole clan and we were spoiled by turkey, mashed potatoes, homemade noodles, sweet corn . . . Many hands worked hard, and it was sooooo tasty (particularly after a week of many sandwiches). ;o)
Josh's oldest aunt told stories of growing up at the end of the dust bowl, and shared the family history--it was fascinating to hear (and the history lover in me loves to see people preserving family stories).
The next morning we set for home--it was a long day of driving, leaving at 9:00 a.m. and getting home at 7:00 p.m.
It was a good trip--we packed a lot in--so I'm not going to claim it was relaxing (are trips ever relaxing for the parents??). ;o)  An added perk through the whole week was getting to watch the Olympics.  We have a tv out here, but all we have is Netflix (by choice--we could get a satellite, or put up an antennae, or pay for cable, we just don't).  It doesn't really bother us, but we were sad to miss the Olympics.  We enjoyed cheering on the USA from all of our different hotel rooms each night.  And that wraps up "Vacation 2012."
The End. ;o)

Oh.....poor Owen....first he gets lost at Shliterbahn (sp?) and then he doesn't survive the Titanic. It would seem you were *WISE* to keep a hold of that life jacket strap, given his record with water related activities. :) You did a great job of packing a lot in and I'm with you on loving to hear "real history" from people who actually lived it. There's just nothing quite like that!!

Oh I'm so glad to see so many pics from your amazing family vacay...loved seeing it all! Beautiful shots...looks like great family time and beautiful tours you went on..the arch looks cool! And yay for Charming Charlie's. :) Hope you can all get rested.

..and p.s., THANKS for the prayers...things went VERY well with the kids--I appreciate it, sweet friend! :)