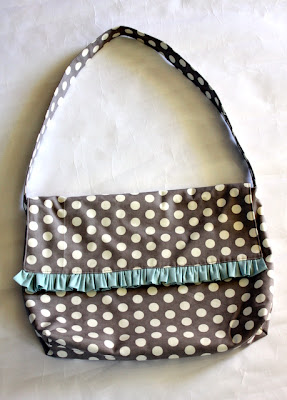 I've been toying with the idea of a messenger styled bag for awhile, taking my inspiration from these and also this.  I wanted a bag that I could slip my laptop into for traveling, as well as a bag that would look cute (most importantly). ;o)  I loosely followed this tutorial, but used my own measurements as well as made a few adjustments to suit my needs. 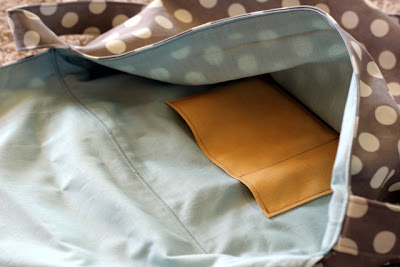 I added a happy little yellow pen/phone pocket.  I pointed out to Josh that "Look, I made the pocket a little bit bigger to accommodate an iPhone when you get me one!!"  He may have snorted.﻿ 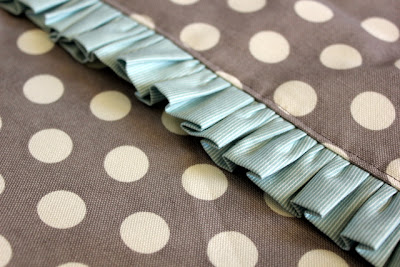 My very favorite part is that ruffle--the ruffle totally makes the bag, doesn't it?﻿ 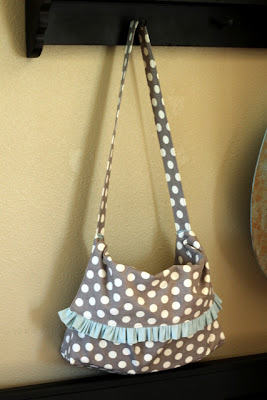 For the most part I'm thrilled how it turned out, but you see how it hangs there with stuff in it?  It's kind of slouchy.  I was envisioning something that would retain its shape better.  However, I was on a sewing roll Wednesday evening, and as I debated waiting until I had a chance next week to grab some extra thick interfacing or just keep sewing I decided I was too impatient.  I hoped the thicker canvas styled polka-dot material would do the trick.  And well, it did not.  I'm going to make a stiff bottom insert, and maybe that will help the slouchiness a bit.  I wish I had yards and yards of the polka dot material.  I love it . . . but it was $16 a yard . . . hence I only allowed myself one measly yard of it.  I'm hoping to make a new Bible cover with the remainder of the fabric via this tutorial.  Mine saw its better day a few years ago (first the handle broke off, than the zipper stopped working).  The only purpose it served was holding the cover on my Bible!  I've debated getting a new Bible but I would have to transfer all my markings and notes and that would really be a process!  A new cover seems the best route to take. ;o)

Anyway, that's what my sewing machine has been up to lately.  Any crafty projects in your parts?

Oh wow this is completely cute! And yes, that gorgeous ruffle totally makes it. LOVE! :)

Nice....I have a neighbor who is asking me to make something like that. I may have to try it....or pay you to make it for me! :-) I need to do more sewing...like finish Addi's quilt and then make all those pillowcases for the other 8 grand kiddies! Plus I want to make Granny and Karen each a 3 pocket wallet to give them on my trip "home" next week.

LOVE the polkadots and ruffle! You are so great with getting all your adorable projects done!

So cute! You make such great things. Sewing machines and I do not get along, so I am VERY impressed!