This week--
~"Why?" to nearly everything we ask him or inform him of.  When we've given a sufficient answer he says "Ohhhh . . ." and then repeats what we've said.  If our explanation was insufficient he asks "why" again. For example:
"Mommy, you going running?" he asks.
"No, not right now."
"Why?"
"I don't want to right now."
"Why?"
"I want to stay home with Owen."
"Ohhhh, you want to stay home with Owen!"

~Sitting in every open box shaped container and driving it like a car.  The other day he wedged himself into a lunch box sized cooler, gripped the imaginary steering wheel, and launched into the chorus of "I have the Joy, Joy, Joy, Down in my Heart."

~Pulled down his Buzz Lightyear undies *just enough* to display his "wares" and chased down his siblings (who fought to keep straight faces when I lectured them "not to laugh it only encourages him" but have you ever been chased by a flasher of the two year-old variety?).

~On a similar note, he was sitting on the couch by himself when suddenly he started laughing and informed me, "I tooted!!" (which baffles me because NEVER has anybody made a big deal, or encouraged him to think bodily functions humorous).

~While I sat in the corner of the couch reading my book, he climbed over with a book of his own, "Mommy you read this to me?" he asked.  I replied, "Just a second." At which point he reached over, shut my book and said in a sing-song voice, "The end!" and then shoved his book in my face.  I got the point.

~After tucking him in for a nap and shutting the door I hear a small voice ask,"Mommy, you come snuggle with me?"  Melt.  So, I go snuggle with him and after five minutes or so a little arm tucks around my neck and he says, "Mommy, I love you."  Wouldn't have missed that moment for anything.

~LOVES himself a good reaction . . . not unlike a certain father of his I know. ;o)

~Reminds me a lot of Marissa's toddler personality, what we like to remember as a "sunbeam."

~Was found "Fred Flinstone-ing" it down the street in front of our house on a Barbie tricycle (before anybody gets concerned there is only one other house on our "street" and basically no traffic--it's a dead end--he was out playing with the kids and decided he could ride a bike just like them).  Josh and I watched him from the window cracking up at the sight, by the time I had my camera he had made it to the drive way-- 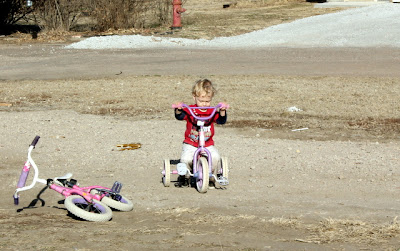 That little guy . . . he is continuing to keep us in giggles and snuggles . . . I don't know what I'll do for comic relief when he outgrows his current adorable-ness. ;o)
Posted by Janna at 1:59 PM

LOL at all his hilarious boyishness! I LOVE this posting...what fun memories to treasure. And what a gift that the Lord gave us children for so many laughs. :)