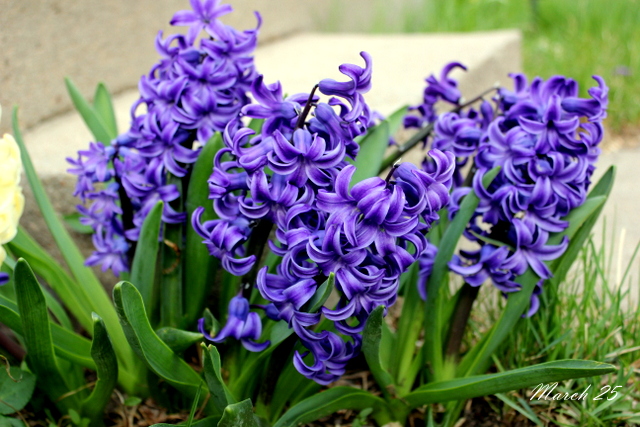 I love hyacinths . . . at the first house we owned I planted some and loved when they came up the next spring.  They smell so good!  These aren't exactly *my* hyacinths--I ran past a house that was empty/for sale and thought nobody would mind if I returned with my camera and admired the flowers (I hope!). ;o)
~﻿ 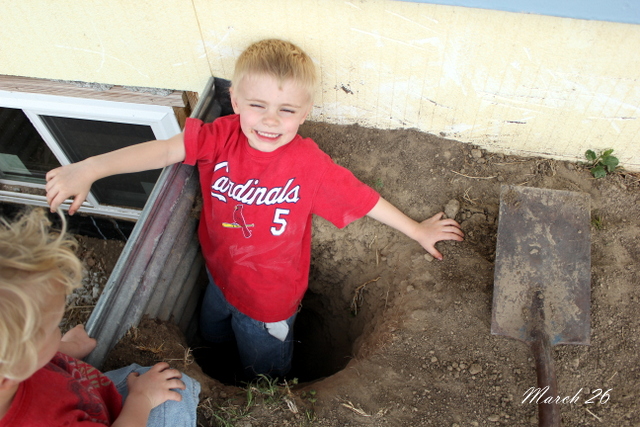 There were rumors about a "3 feet deep!" hole that was getting dug in the backyard.  I didn't pay much attention as it was my boys starting the rumor and they are prone to exaggeration.  Let's just say I was rather shocked when I finally did get around to checking on their progress.  They were attempting to tunnel under the window well!
~﻿ 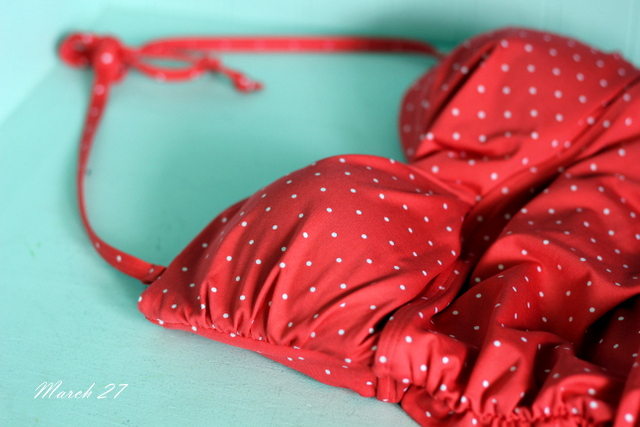 {where I subject you to gushings about a swimsuit}
So, for like TEN YEARS I have worn the most boring black tank suit every summer.  It got the job done and kept what needed to be covered hidden. ;o)  Each summer I hope to find a new suit and will subject myself to a few trying-on-sessions here and there and I never find anything that will work--and by work I mean look cute while allowing me to play with my kids in the water.  That takes a special suit.  One day I saw a cute little red polka-dot number pinned on Pinterest. It was lovely but $90, and I am just not going to spend that.  And then a few days later another red polka-dot swimsuit showed up . . . only this one was Old Navy and it was $45 (plus I just so happened to have a 15% off code).  I told Josh I had found THE SUIT.  Knowing my past fruitless searches he gave me the green light (even though it is still more than I would like to spend on a suit).  I had that baby bought in five minutes.  And would you believe I LOVE IT!  I can't believe I like a swimsuit I never tried on!  Not only does it have polka-dots (I rather like polka-dots) but it gives the illusion that I'm shaped more "womanly" and not so much like a 12 year old boy. *ahem*  As an added bonus it has "control max" and let's face it I've had five babies . . . there are some things that running just can't touch. Right?? Right. So yeah, perhaps I have entered the world of "old lady" suits, but I don't care--it is an awesome suit for a mama who is going to be playing a lot of Marco Polo and drenching her children with cannon balls. ;o)  And no, Old Navy did not pay me to endorse their swimwear, but I'm totally open to the option should they need a spokeswoman. (hint hint Old Navy)  They also have a black, blue, and plain red in the same style if you're in the market for a good suit!
~﻿ 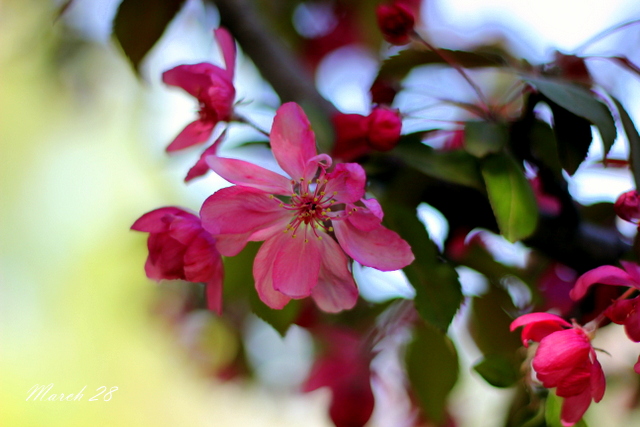 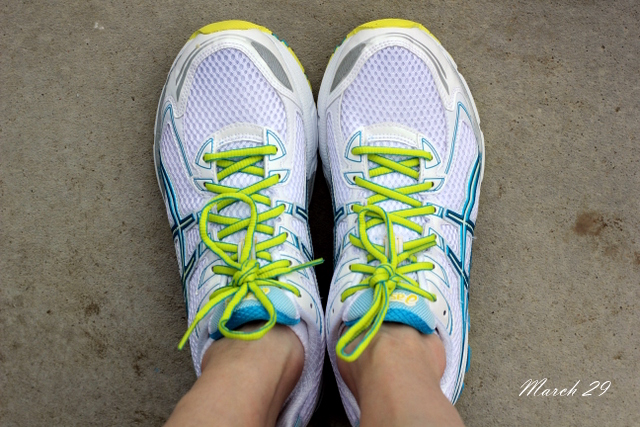 First run in the new shoes!  After a very brief midweek visit to Lincoln I had myself properly fitted for some new shoes.  It would seem I'm rolling in (or was it out?? I can't remember . . .) and flattening out my arches.  I must say as I eyed the shoe wall with all its brightly colored shoe candy I was a bit giddy at the prospect of what my "shoe-fitter" might bring out for me to try.  Sadly, the three pairs she brought out for me were all white . . . boring white.  I'm thinking if I'm paying more than $100 for a pair of shoes they could look more snazzy.  I have a hunch they might be old lady running shoes.  (And really, despite my several references to old ladies, I really do love them, it's just mentally I still like to think I'm nineteen-ish--the swimsuit and the shoes are telling me otherwise . . .).  ;o) However, the good news--I've completed several runs and no more stabbing arch pain, so the boring white shoes seem to be doing the job.  At least they have some blue on them--it redeems them a bit in my eyes.
~ 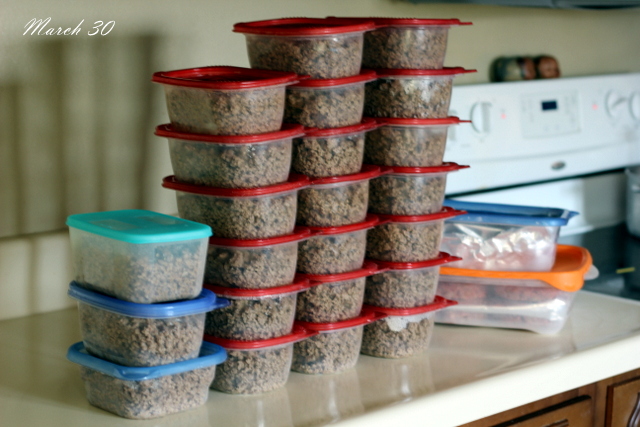 We also brought back 33 lbs of hamburger from Lincoln.  I can never find a good deal out here, but Super Saver will have their "manager specials" and it just so happened they were having one that day.  Josh got home from school Friday and browned it all up and then we made hamburger patties for grilling.  I love when the freezer is stocked with ready-to-use meat!
~ 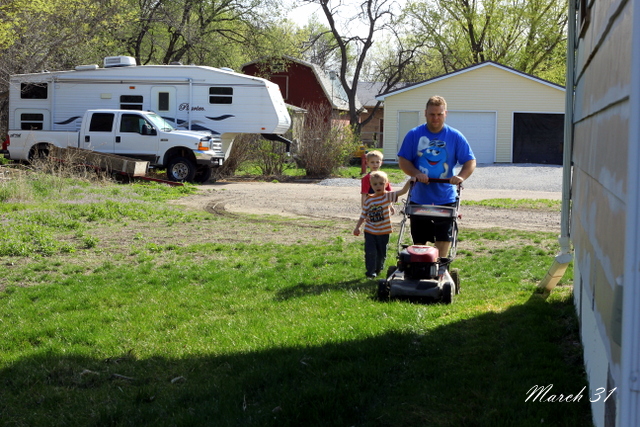 Josh out mowing the weeds grass with a little helper.  Emmett followed him the whole time, one hand helping Daddy push.  So sweet. ;o)
Posted by Janna at 9:58 PM

Dealing with raw meat is one of my *most* despised jobs! I hate the smell, the sound, the texture! The fact that *Josh* handled this job for you makes me slightly---okay, A LOT--jealous! :)

I'm glad you're seeing some good signs from your new shoes. Sounds like you really needed to be fitted with a good pair before these last few weeks of long runs!! As I sat waiting for my shoe fitter to bring me my choices I admired all the styles on the wall. Then I was greatly disappointed with the 3 I had to choose from, too. Does *anyone* actually get to walk out of there with the cute green shoes??

i have been eye-ing that swimming suit as well. very excited for you.

LOVE the flowers and the fun new running shoes--yay! The prepped ground meat looks great...and I'm especially excited about the swimsuit find! ...I've been dreading it to do this year, and you've given me hope. :)

I'm with Anna, been dreading the swimsuit hunt (it's been many years since I've bought one) glad to know there ARE good, affordable, cute ones to be had! So glad you found one. :-) And your laces are snazzy, no one will think your shoes are old-ladyish!