Owen BEGS to peel potatoes, so after I got done with supper prep I gave him the peeler and one potato.  It keeps him busy for a very long time.  (On and unrelated note, can anybody tell me how I managed to make that yellow-ish circle thing in my photo?  I took several pictures--all with a window to the right, afternoon sun--and they all have some version of yellow blob in it).
~ 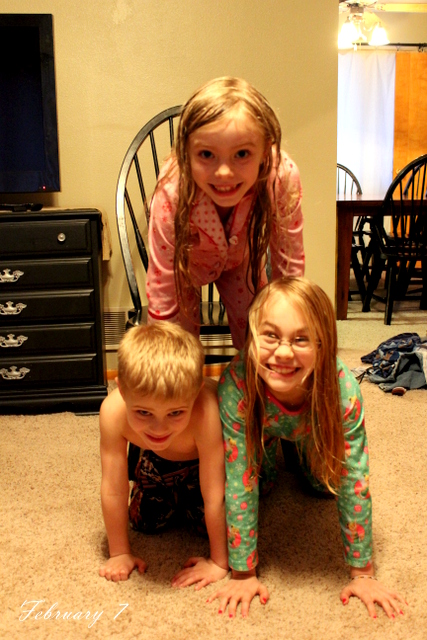 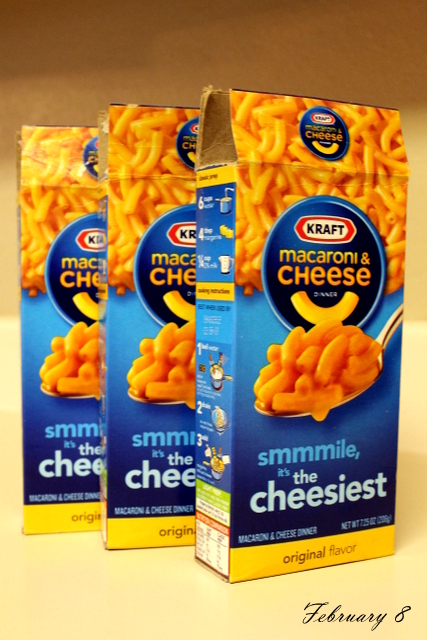 A slow picture day . . . I broke into the emergency stash of mac n' cheese because we were dreadfully low on groceries after being gone all weekend (and having no violin lessons this week).  I thought I might note that three boxes feeds five children.  All of the sudden it seems ALL of them have experienced a growth in appetite.  Some nights a 9x13 of whatever can barely feed the whole gang! I sense scary amounts of food consumption ahead . . .
~ The kids have been putting on plays.  I have no idea where they come up with this stuff.  The first one was "George and Rosie get the Turkey." George was played by Jackson, Rosie by Isabella, the Turkey by Emmett.  Owen was probably the turkey's apprentice.  Marissa was the director, soundtrack, special effects and narrator.  This picture is of "George and Rosie at the Beach."  A similar idea except the youngest brothers were sharks.  And that duck hanging from a stick?  Why a seagull of course!  I must say it was NOT a relaxing beach vacation . . . surprised by sharks, pooped on by a seagull, and bit by a crab--oh my! ;o)
~ 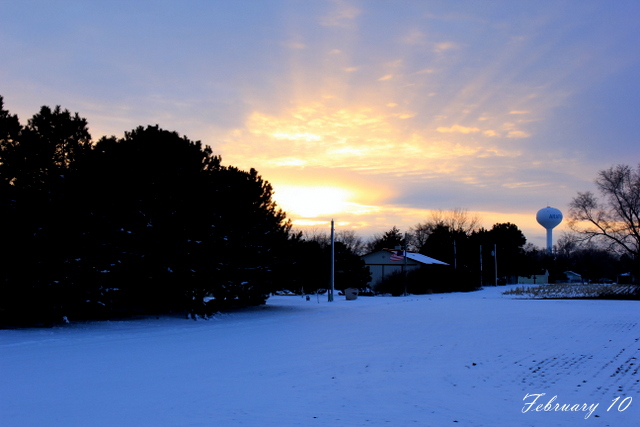 I know, I know another sunset, but I loved those streams of light. ;o)
~ 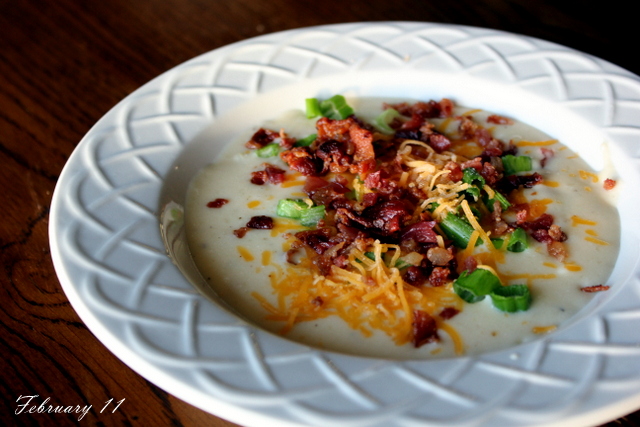 Baked Potato Soup (recipe here) and some homemade oatmeal yeast rolls for supper--so yummy on a rather chilly February day.
Posted by Janna at 4:16 PM

I am in love with that first shot of the warm sun contrasted with the cold snow--it's delightful! And your soup picture is BEAUTIFUL...makes me want to eat it. I'm smiling at the bedtime circus and the play...I'd love to sit in on one of those. :)

...and way to go with potato peeling trainee! He'll be a very popular man someday. :)

The "yellow blob" on your picture is sun flare. The light shining and hitting your lens just right as you take the picture. Some photographers work very hard at getting that in there picture for an artistic effect so.....way to go!! :) I *love* the play and your interpretation of the beach day. haha! I think I will star in the production that involves lying on the beach with a glass of iced tea and a nice long book.

For the sunflare: Like Kathy said, it happens when the sun is shining right on your lens. In those situations you can try a hood on your lens if you have one or sometimes just shielding your lens with your hand can help if it is bugging you. Sometimes it is nice though!

I'm obsessed with skies too, so love those rays of sun! :-)