Running . . . 37 miles!  Signing up for the half marathon made me a wee bit nervous as it is winter and I have no treadmill.  January was more than agreeable!  My goal was to get out five days a week for two mile runs.  I didn't completely do that--I averaged four days a week.   I realize a hardcore runner could probably log that in a week or two, however, it is the most I've done (and most consistent) I've been since high school. Baby steps. ;o)

Reading . . . 8 books!  My favorites were Hannah Coulter by Wendell Berry and Though Waters Roar by Lynn Austin.

Listening . . . We discovered David Garrett (watch this, or this, or this). We "youtubed" him almost daily, loving not only his classical pieces, but also some of the modern pieces he has put a little "violin spin" on.  I investigated seeing him in concert this year only to find the closest he would be to us would be Chicago . . . just this past weekend.  Maybe next year . . .  And as far as my girls go, I've been enjoying Marissa playing Dvorak's "Humoresque" and Isabella playing Schumann's "The Two Grenadiers."  I'm not going to lie, Suzuki-styled violin has been a major investment of my time as I have to practice with them daily, but it's so exciting to really see/hear some musical growth in each girl lately.

Watching . . . I'm not a big tv watcher, but Josh and I do enjoy getting caught up on previous seasons of "White Collar."  And I must admit to developing a fondness for "Bones" (also previous seasons, we only have Netflix for tv, no cable/satellite/antennae).  I usually wait until Josh has watched the first five or so minutes so I don't have to endure the whole "shock factor" of finding the body. Blech.  But the solving of the crime is always interesting, and I really like the main character Temperance (cool name).

Entertaining . . . not only did we have the pleasure of Josh's parents coming out this past weekend, it also just so happened that some friends of the girls had a daddy doing business in the McCook area. He dropped them off this morning and we're having a sleepover tonight. It is so fun to have visitors!!! The kids spent nearly the entire afternoon outside--what amazing January weather!!
Around the house . . . I packed up the Christmas tree and promptly rearranged the living room.  I'm liking the new set up so much more! (Old set up here--scroll down for a more complete picture) I also FINALLY got my books unpacked!  Josh built me a matching shelf (to the one we built a few years back) and I painted it black.  They each flank the big living room window. I also organized my craft area in the basement, and hung one wall of pictures.  In the end, lots of little projects got done, and I'm happy with what I accomplished. 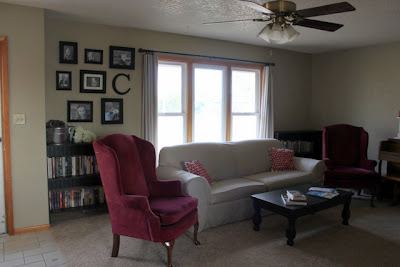 That blank wall over the other shelf is where the next grouping of pictures is going.  I switched the piano and tv (and by "I" we all know that means "Josh under coercion"), and then moved the small hutch to sit diagonally in the corner between the piano and tv.
Onward to February and the end of wrestling season!! ;o)
Posted by Janna at 7:41 PM

Living room looks nice...show some more pictures so I can take it all in! Good for you on the running!

You have had a full January and accomplished so many things. I love the photo wall and the bookcases on each side of the window. The room has such a welcoming look.Keep up the great progress with the running. I happen to know someone else who is pushing a little hardier in the training dept. It's always nice to have a friend to motivate you to keep pressing on, whether it is in the spiritual realm or the physical.
"Hello Febr.," looking forward to reading the Steadfast happenings for this month. Blessings, Mimi

Wow, way to go running & reading--what a fruitful January! SO glad you could have some visitors and look forward to wrestling being over. I enjoyed the violin (WOW), and your living room looks lovely. :)

Loved seeing what you've been up to. Your gallery wall is perfect and I like your new arrangement of furniture. We've been living parallel lives, it seems, as I've been doing lots of reading and "running" too and also like to watch Bones (sans the first 5 mins or so) :)

Bones! Yes! I watched the first 3 seasons during a rough bout with flu when Luca was a baby and I could mostly lay around, and have been addicted ever since. :-) Hulu keeps me current now. Very impressed with your running!