This art project was another idea "pinned" on Pinterest, but the original source would be here.
The idea is to draw your picture with Elmer's glue, outline it in permanent marker and then watercolor over it all.  The glue repels the paint giving it a cool effect.  I let the girls draw their own pumpkin shapes, but didn't even let the boys give it a try.  I had a feeling it might be too hard and a certain middlest (spell check isn't recognizing that word, but it's a real one as far as I'm concerned) child might end up utterly frustrated, so we just skipped that step and I designed the boys' pictures. ;o)  The painting is the fun part anyway!
Marissa's-- 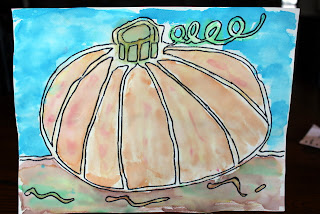 Isabella's--
(she must share my love for specialty pumpkins) ;o) 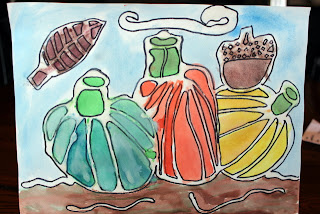 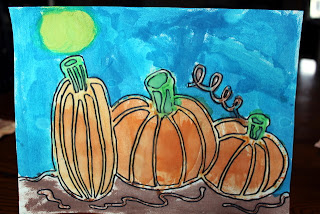 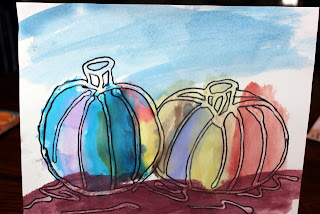 Owen's
(he may have used more water than paint, noting the "scrubbed" texture) 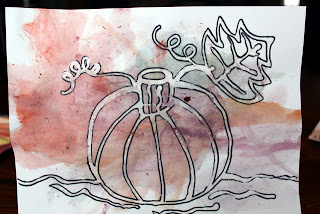 Fairly simple and lots of fun!
(And just for the record I have picked this day as the day my sister will have her baby--she's due tomorrow and has never been late before, so I'm hoping . . . although the 19th would be just as  awesome as far as I'm concerned . . . but she would probably kill me for thinking such a thought!) ;o)
Posted by Janna at 6:00 AM

These are so cool... going to try it!

Hey cuz'! I need to get your new address. I am trying to be good about keeping my address/contacts book up-to-date. Please email it over to me at warm.bouquet@gmail.com.