I bought my muffin tins two years ago, envisioning fun and festive meals on a weekly basis.
Suffice to say, that has NOT happened. ;o)
We have used them, just not nearly as often as I thought we would (although they do make handy trays for eating in the vehicle).  The kids LOVE when I pull off a themed meal for them. Both of my boys recall with fondness the car I made out of a pear (and that was two years ago!).  So, we broke out the muffin tins again-- 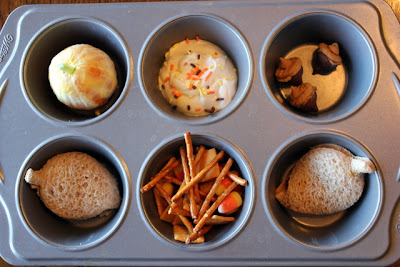 Back row: an orange with a celery stem (it's a pumpkin)
Greek yogurt with a few fall-colored sprinkles on top
Acorns--half a mini nutter butter stuck to a Hershey's Kiss with a peanut butter chip stem (the favorite by far)
Front Row: PB and J cut out like a leaf
"Fall Mix" (craisins, pretzels, cheese-its, a few candy corn)
another PB and J
Fun memories.  But for the record I ended up with FOUR loads of dishes yesterday . . . not exactly the way to spend one's birthday.   Thankfully I am officially caught up (until lunchtime anyway). ;o)
Posted by Janna at 6:00 AM

I'm sure the kids loved the muffin tins. I like the assortment of things to eat.

Also, where did you find the mini nutter butters? I have only seen then in snack packs with other "mini" cookies. That's what Laura used to make hers for a luncheon. I'd like to find a box of them. Let me know.

Oh man, this is *SO* cool! Love the orange pumpkin...and those adorable acorns are just perfect. This is so fun and inspiring.

(but how sad to have FOUR loads of dishes on your birthday!) ;)

We're huge muffin tin meal fans, even my big kids, although they need "refills" to get enough to eat.