The Great Slipcover Massacre of 2011

I have this couch.  It is nearing eight years of use.  It is a nice sturdy Broyhill, the cushions still firm and intact, three out of four legs still attached (the 4th we just prop up, you know), and overall comfortable.  But the fabric, well, it saw it's best day maybe four or five years ago.  The last three years my couch has spent its days in a slipcover.  An awful, bunchy, wrinkly, color of burgundy-I-now-abhor slipcover.  If you've ever had a slipcover I think you will know what I am talking about.  It is possible I hate them.  At some point, when the timing is right we'll invest in a new couch and I will threaten my children with life and limb to never ever sit on it, and then one day somebody will spill hot cocoa on it . . .  As much as I would love a new couch, I'm not sure I'm ready for all that drama.  Plus, I still have an Owen to potty-train (and totally off subject, but he pooped on the potty the other day--yay Owen!!). ;o)

But back to slipcovers.  I told Josh that if I had to move that ugly awful couch with its ugly awful slipcover it would ruin the vision I have for my new living room--the couch would be an ugly awful eyesore.  He thought the couch was just fine.  And all the slipcovers that looked like they might be better options were running in the $115 range.  I would much rather save than kind of money for a couch fund.  My living room vision was dying.  But then, I thought, "AMAZON!!"  What doesn't Amazon have??

And there she was.  A two-piece slipcover for half the price in a lovely neutral that could be paid for via my Amazon money (acquired through swagbucks).  Josh agreed.
Monday, the slipcover arrived on my porch.  I tore into it in excitement.  I slipped my cushions into the big cushion case and discovered about two feet of extra fabric.  Hmmmm.  The wheels were turning.  Maybe I could make this into two separate cushion slipcovers?  A bit of piping here, a seam here?  And then I tried on the couch portion.  With devastation I realized it didn't fit the corpulent arms of the couch correctly. The fabric was pulling terribly in the area where the arms connected to the back of the couch.  I tugged and readjusted and there was no way to make it work.  But maybe I could cut a hole here and patch in some fabric and . . .
In an act of sheer bravery (or perhaps insanity--I took advantage of the fact Josh was not here to see what I was doing!) I took to my brand-new cover with a pair of scissors and a seam ripper.  Isabella told me I was making her nervous. It wasn't pretty. I spent most of Tuesday afternoon piecing it all back together.
And today-- 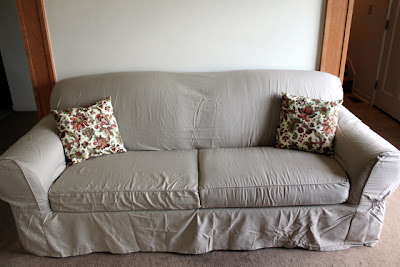 Excuse the wrinklies, I'm going to pack it back up and I refuse to iron it until we are setting up in the new place. And yeah, I had to sew some fall-inspired pillows for it too. ;o)
~
Here's the spot where I patched in fabric because the arms weren't fitting right-- 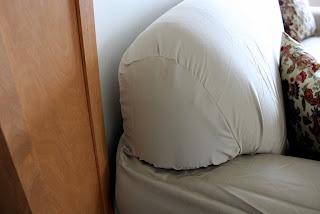 I make no claims to perfection, but it fits so much better now.
~
And that is how I became the owner of a semi-custom slipcover!  I can't count how many times I sat and stared at that couch wondering if I was brave enough to attempt to slipcover it on my own.  This way I had something to start with (why reinvent the wheel!), and then with a few tweaks, have something that fits so much better--all for the cost of the cover (which if we're getting technical was actually FREE), and a yard and half of cotton piping. I hope Josh likes it! ;o)  And if I squint my eyes a bit and darken the room, I can *almost* pretend it is this-- 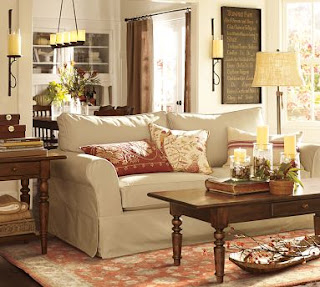 (image courtesy of Pottery Barn, which is my nice way of saying I copied their picture without asking first)
Bye, bye burgundy abomination!! ;o)
Posted by Janna at 9:37 PM

Lovely job! I'm very impressed at your slipcover alteration skills. It looks beautiful, can't wait to see it in the new place! :)

Wow--it turned out great! We've been fighting the slipcover battle for 8 months now. Several times I've studied the thing over deciding how I could redo it to fit our couch right. And every time I've chickened out. This just might be the motivation I needed to dive in. :-) That and the fact if I really mess it up, I now know where to get one for half price!