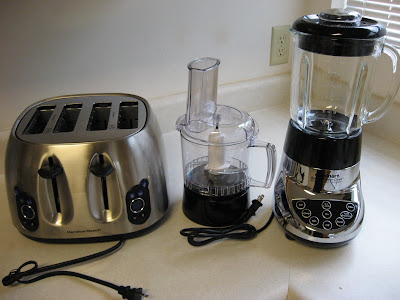 "Happy anniversary to me . . . hum, hum, hum-hum, hum, hum . . ."
So, next week is the "big one."  Number 10.  In honor of that a few more appliances bit the dust, namely the toaster and blender.  Kohl's was having a decent sale this weekend (plus the added bonus of the employee discount Josh gets working there) so we decided it was time to find replacements--breakfasts were getting rather boring around here, nothing to toast with, no orange julius to whip up . . .  I told Josh it could be my anniversary present, at which he was mightily relieved, and now I'm the proud owner of a dual blender/food processor and a four-slice toaster. Yippee! I've never had a food processor before, so I'm excited to experiment with it.
But it got me thinking about about the state of a lot of other things we had registered for when we were young and starry-eyed.  A few towels still linger on in their nearly threadbare state, copper-bottomed pans not looking so coppery, not enough bowls left in my original dish set to feed my own family let alone a dinner party of twelve.  "The Originals" have certainly taken a beating. Worn around the edges, scuffed, wobbly, dented . . . It describes a lot of stuff around here.
If I'm honest, a marriage of ten years (or twenty/thirty/forty . . .) shows similar wear. Disagreements, disappointments, unmet expectations, hurt--a marriage can take a beating.
But the joy of the years passing, God's grace growing us, changing us, is this--
A marriage scuffed, dented--it's not something for the trashcan.
It is a beautiful thing.
I came across these words "a fickle feeling turned into a ripe and firm decision" and I thought about how true that is.  What did I REALLY know of love at the age of 20?
To be someone who "made a vow and had the bravery to let it age"
THAT is beauty, broken in, worn around the edges . . . We're softer now, laugh lines and crinkles more visible, a few silvery hairs having the audacity to appear.  And there's a graciousness to each other that has slowly been ripening all these years, a yielding, an acceptance. I can only imagine that with each passing year . . . decade . . .
That SOME things . . . they DO improve with age.
(Toasters, blenders, towels . . . not so much).
But a marriage--it can only get better.
Posted by Janna at 9:22 PM

Every time I see a glimpse of your heart, I just like you more!!!! Thanks for sharing this! p.s. LOVE the new appliances, too!!! :)

I love your words here, Janna! And congrats on 10 fruitful years together...and how great to have some new appliances around for your quick-order kitchen! :)