The many faces of three months: 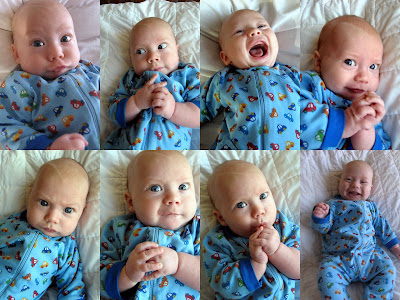 Anybody else see Jackson's "angry eyebrows" in picture #5? ;o)
Three months finds Owen--
nearly bald except around the "cuffs"
in his first box of "size 2"
Mr. Social with all his cooing, smiling, and laughing
trying to fit both fists into his mouth (I think he wants to be a thumb sucker but hasn't the coordination for it) ;o)
Today I was reminiscing about my early mothering days, when I scheduled pictures every three months on-the-button at JC.Pen.ny (you know, 3, 6, 9, 12, and then at 18 months, 24, and then we went to every year) Sometime during Jackson's first year things began to space out. Emmett got a picture taken at three months, and that was THE END. Only a crazy person would keep up that kind of schedule with a little person entourage. So, yay! for digital cameras and yay! for photo editing programs. Just the thought of a small room with five children and trying to get "THE SHOT" makes me feel all sweaty. I'm sure I've added years onto my life by discontinuing that ritual. ;o)
Posted by Janna at 5:56 PM

Absolutely love the pictures. I have to print this out, maybe send one to Great Granny!

Love the pictures! So CUTE!

What a cutie! The faces are GREAT! I really see Isabella, even if he does have the Jackson brows on #5. ;)

I LOVE this collage! What a handsome little guy, and SO sweet...love how you captured all those adorable expressions.