Over the years my girls have supplied me with lots of pictures--pictures of people, flowers, animals, rainbows . . . intricately organized fairy pantries, lavish feasts, decorated party rooms, princesses in dresses . . . You know, GIRLY stuff.

Now that Jackson is drawing I'm finding there is a startling difference--his pictures involve ACTION, stuff like him hiding in an apple tree with just his feet dangling out and Daddy can't find him, or him taking command of a pirate boat and a shark bumping the pirate boat up into the air and Emmett falling off and drowning but Jackson put on his swimsuit and jumped in and saved him (yep, all in one picture--and wow was I relieved he took time to put on his swimsuit before saving his brother's life) and then lately there are the rocket ship pictures: 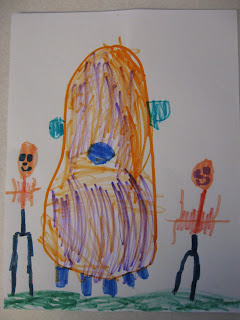 First he drew one with me--as a blonde!-- watching him head out in his rocket. The picture above is Jackson (on the right) and on the left his new friend "Cabby Spork" getting ready to travel to space together. I have no idea how he came up with that name, but as always, the details delight me. ;o) He'll probably be on a rocket kick for a few more days. In the meantime Emmett has been drawing spider webs (at least that is what he calls the scribbles he has regressed to . . .), and the girls are drawing blueprints for fairy houses to build once spring arrives. What fun I have seeing life through their art! ;o)
Posted by Janna at 7:00 AM

I love this, this is SO CUTE! ..the difference between boys in girls is a good part of Creation to see..especially at such a young age. The rocket ship is very cool! Love this posting...and the fairy houses sound really neat! :)