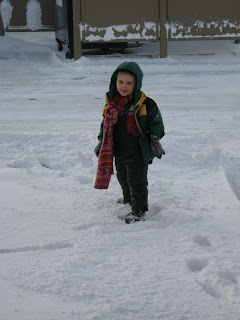 Jackson woke up somewhere in the vicinity of 6 a.m. He had grands plans for his day, all involving snow. He spent 7 a.m. to 8 a.m. unearthing the things he needed for this adventure, despite his mother's lack of enthusiasm. He awoke his father to inform him of his plans for Daddy to make him a big "Snow Potato"--he was going to stick in his potato head parts to decorate. Finally, since he HAD dressed himself fairly decently, I relented and sent him out for a few minutes to "make footprints." We all watched him from the window, and the crazy and utter delight he found in running around out there. Oh that boy. ;o)

How sweet to revel in the simplistic joy of snow! Wish I could recapture a bit of that for myself instead of thinking about trying to find which boots fit which pair of feet, where the match is to the blue mitten, a pair of snow pants that does not have a busted zipper, etc, etc. :)

Oh Kathy that is so true!! I still need to go through everything and figure out what will fit who, what we are missing . . . Same story every year--always caught unprepared. ;o)

I love this, this is so much like Calvin, he HAD to go out today...not caring that it was 10 degrees! The snow potato sounds like an awesome idea...and love the pic.