I own two muffin tins--a rather beat-up, normal-sized 12 cup one and a 24 cup mini-muffin pan. For the most part, recipes for muffins make 12 normal-sized muffins. Every now and then I come across one that doesn't, and I remind myself I need another muffin pan. (And of course promptly forget about it until I make a larger recipe again.) ;o)

And then I discovered the whole "Muffin Tin Monday" concept. I made it my goal to locate some cheap 6 cup muffin pans. Not that this was the driving force behind my day or anything, but if I happened to be at a store, I would check the baking aisle. Discovery #1--they don't seem to sell normal-sized 6 cup ones--unless they were those fancy-schmancy new silicon ones for $10 each. Discovery #2--it seemed it would be cheaper to get a 12 cup one. But I didn't want 12, I wanted 6--the thought of trying to fill 12 cups with creative food . . . Well, that seemed like A LOT of work. I really couldn't justify spending a total of $40 on the silicon ones either. For that I could get a whole set of four place-servings, you know?

Well, today we were at Ko.hl's, using our cool little discount on some stuff. We were in the kitchen wares, Josh contemplating a grill set that had been marked 50% off--otherwise I am usually not over in their kitchen area. He asked if there was anything on the other side of the clearance rack I needed, and wouldn't you know, there was a stack of muffin pans--the six cup jumbo ones. And there were four of them. They were clearanced out at $6 and some cents--plus I had 30% off to use--bringing them down to $4 and some odd cents a piece. 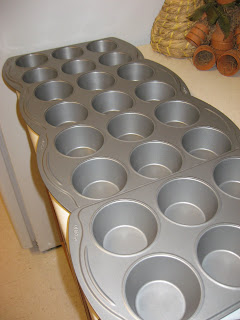 Can you believe it? I was beginning to think I would slowly purchase my pans over an extended period of time until I had the amount I needed to do this fun meal with my kids. Isn't it strange the things God works out for us? I'm always amazed--to think He would answer a silly wish, something I deemed too silly to even commit to prayer. I am humbled again, makes me wish I had prayed about it and gotten to see the answer come to fruition.

Oh I love to hear little encouraging things like this...I sometimes sheepishly pray about insignificant things, thinking God must not care..especially in the department of buying 'worldly goods' ...but He has also charged us to be good stewards and always blesses when we seek His wisdom in all areas...loved this posting, Janna thanks for sharing!!

I love when the Lord blesses us with these little joys in life...sometimes it's the very simplest of things that He shows Himself in powerful ways!

I might have to stop by our Kohl's now and see if they have any on clearance here!!