On Monday we begin our '09/'10 school year, and of course, there's been a lot of organizing going on here (can you tell I'm kind of stuck on a theme--I think nesting has descended upon me a bit early . . .) So, because I'm excited about all the shiny new books and really sharp colored pencils, I thought I would let you share in my giddiness. ;o) 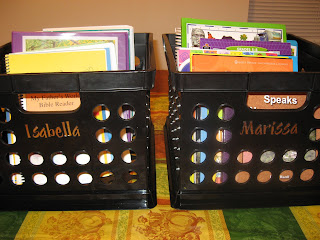 Storage crates for the girls to house all their subjects 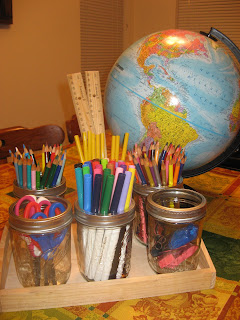 A new system for organizing supplies, pint-sized canning jars in a tray
A new globe 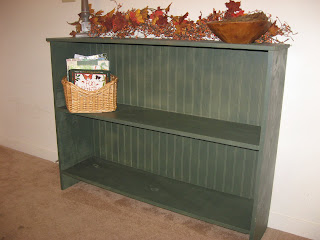 An empty bookshelf awaiting all the library holds I placed tonight.
The bad thing about homeschooling two children is I reached my limit of 25 with just the books on Marissa's list. And because I may possibly be a wee bit behind in catching up on library fines on the other three cards *blushing furiously* I think I may sign Jackson up for a card. Oh, I'll get the other cards paid off eventually--trust me, the library has been funded quite well by my family.
I've also sorted through all the baby boy clothes, decided what will be usable for this little fellow, and reorganized the boys' closet. Marissa is practicing violin again. I grocery shopped for "Menu 1" today, it still needs some tweaking, but I'm sooooooo excited about my perpetual list. It may end up being the highlight of my year. Well, 2nd probably to the arrival of the new son. ;o) We're still hunting for a name. I'm kind of liking Owen--is that weird? I'm getting a lot of mixed reactions. Josh isn't overly fond of it, but will concede perhaps if his middle name is Joshua. ;o) But then his initials would be O.J. Which I either think of orange juice or O.J. Simp.son. The third time around it kind of feels like slim pickings. And not that there aren't a whole bunch of fabulous names out there, but I would like to find a name that no one in "my circle" already lays claim to.
Sorry, I've taken to rambling. But if you have a name that kind of sounds old-fashioned, but isn't too weird, and yet still original, do tell. Preferably having a different initial than all the rest of my kids. I've been through the name book at least three times now. Maybe I need a new name book. A few others on our list: Desmond (Josh's pick), Freeman, Pierson, or nice and normal Nathaniel. Decisions . . . :oP

LOVE your school room goodies!!!! Maybe my boys would like to come over for their school! :)

Names.....such a tricky thing. If I was having another boy I would try for "Hudson." Just like it. Sounds very masculine and makes me think of the missionary Hudson Taylor who was such a Godly man. There's my 2 cents! :)

Bill and I liked Owen if we were to have another boy, but then everyone reminded us about Luke and Owen Wilson (the actors) and we went another route! I do love Owen though. I'll be thinking through my "old names" list!

You sound a lot like me, getting ready for school and baby and all. =) Although, I still feel a little behind on the organization thing. I've never done this "full-time" with my kiddos, so I'm starting from scratch and learning what works and what doesn't. I like your crate idea and might have to steal it. I've also started a rotating meal schedule for 3 weeks and am proud of that, too.

Oh the baby name search...we are there, too. Our children all have odd names, not really old-fashioned. But, we are looking for unique again. Kyler, Gracelyn, Brynnan (girl) and Ezekiel (Zeke) are our kids names. Someone mentioned Dalton to me the other day. Thought that was cute. Deklan, Micah, Liam... Good luck on your search!!

Ooh I'm so excited for your brand new school year! And name-picking is always fun..I think Owen is really cute, it seems to fit your family...I like Nathaniel too...