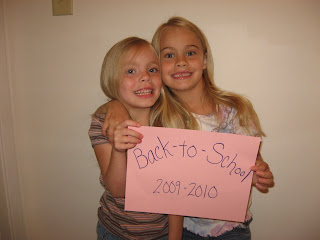 The Good:
An exciting curriculum
A quietly diligent kindergartner happy to REALLY be doing school
A second grader who could already fill in 17 countries on her "Country Pretest"
Getting through everything in two hours 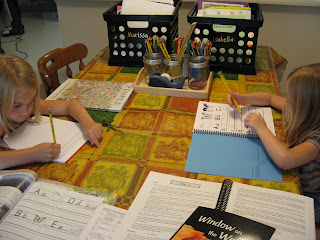 The Bad:
A three year old who woke up from his nap about 1 1/2 hours too early--sobbing
(but Yay! he went back to sleep)
But not before waking up the two year old
(who did not)
(who climbed up at the table, needing to be included and broke into the markers)
(and drew "snakes")
The Ugly:
A second grader proclaiming "I hate school!"
A kindergartner with a rather waning attention span towards the end
The feelings of sheer panic the teacher had as she tried to figure out what she was doing, how she was going to do it and if homeschooling two children at the same time was even possible?!?!
(and then realizing there was still supper, and laundry, and clean up, and violin to practice . . .)
Yep. That about sums it up.
Posted by Janna at 2:45 PM

Hang in there! I don't have any magical answers or cures b/c we're pretty much in the same boat. I do know THE ONE who knows ALL the answers and I'll be praying for you! (Good job, Marissa. I took the pretest along with Luke and we only knew 4. I guess there's room to grow and learn!!)

Uh yeah Kathy, don't feel bad, I was watching her do the test, filling in Sweden and Mongolia and the like, and thinking "I don't even know EXACTLY where those go!" I mean, I can get the general vicinity and all . . . ;o)(I think those continent puzzles have played a big part!)

Oh, no! So sorry to hear about a rough first day...I'll be praying for you guys! I'm sure things will smooth out once you get going...very cute posting. :)

Hi There!! I found you through MTM and I love your blog. Oh how I know how you feel..I too have a K and 2nd grader and a soon to be 3 yo who also likes to draw "circles". I look forward to following along on your adventure!!