The one where I tell you--

I have forever loved babies.  I don't remember not loving babies.  I was helping out in the church nursery as soon as I was allowed.  I was always lingering around moms with new babies in hopes they would offer me a chance to hold a baby.  While other high school students were landing themselves jobs in fast food or at the grocery store I got hired on at the daycare center in town.  I could not wait to be a mom.  That is why Josh and I wasted no time at starting a family, welcoming Marissa into the world on my 22nd birthday.  The next decade of my life was dedicated to 45 months worth of pregnancies and 66 months of nursing.  God brought a peace to my heart as we moved beyond that phase.  I realized I will always adore babies, but that doesn't mean you can keep adding them to your family.  Babies do grow up, and then you have one more child to focus on rearing in the nurture and admonition of the Lord--a daunting task!  We moved into the child growing phase, a phase that gave me a bit more freedom of time--I got back into running, we could do long vacations, everybody was potty-trained, there was no nursing schedule--it was a different stage but a good stage. While I thought the absence of a baby would be sad, it ended up being fine.  We were enjoying our new season of life. We had plans to make no more babies a permanent thing by the end of this year, you know, like surgically and officially take away that possibility? And then one Wednesday morning in September, this happened: 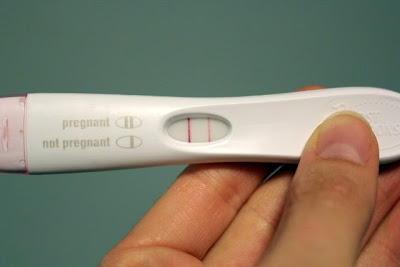 I took a test because I was late, but let's just say, after all those pregnancies and years of nursing, my cycle isn't exactly something you can set your clock to.  I wasn't really taking a test because I thought I was pregnant, but more just for the reassurance I wasn't--I had an old one laying around, so why not?  Let me tell you that dark pink line (I mean look how blatant it is!!) hit the stick so fast I thought I was somehow holding the test backward.   I stood there in the bathroom my hands all trembling wondering how on earth this happened (yes, technically I know what happened, but you know what I mean!). And that mid-afternoon nap I had needed a few days ago (I never nap!) made sense.
{hyperventilating}
I have never been so dumbfounded.  Those first few days--weeks--of trying to get my head around this concept my mind just raced.  I kept giving God my list of reasons this could not be--
Our van only seats seven.
We have a three bedroom house.
I have given away or junked pretty much every baby thing we have ever owned.
I'm out of baby names I love.
I'm not a spring chicken anymore.
Owen will be 4 1/2 when this little one joins us--that age gap is too big!
(and on and on I went)

In fact, Josh got on board quite quickly with this new development, and I struggled.  And through September and October, while I added a little afternoon nap to my daily schedule, craved protein with passionate intensity, and gagged while I brushed my teeth, my body fully embracing "You're pregnant!" my mind did not. I woke up nearly every morning thinking, "That really didn't happen."

But most of all I worried, "What are people going to think"?
Because let's face it, if you have one or two or three kids, you're pretty normal.
When you get to four, you draw the attention of others.
At five people think you are teetering on the edge of insanity.
And six?  Well, I can only assume everybody will be thinking I'm hoping for my own reality show.

I hated myself for worrying about how I would be perceived by others.  For the most part, I haven't exactly followed what "mainstream" is doing.  But now I felt kind of scared and vulnerable, like a 6th baby would put me over the edge of freakish-ness.

I have realized this--how still--STILL--I struggle when *my* plans are waylaid.  You see, when Josh and I got married we were going to have four or five kids and he was going to have a pretty well-paying job, and we were going to have a lovely house, perhaps in Lincoln, or perhaps a nice acreage. That was pretty much the gist of our plan.  And well . . .
There was the brain tumor. Financial distress. Job failure. Josh's return to school. Moving to Arapahoe. Still in Arapahoe. Expecting sixth baby.
It has ALL thrown me for a loop.  And every time I want to say, "Woah!! Hold on God, that wasn't what I was planning!"  And for every single one of those instances, God knew.  He was planning.
I wonder to myself, why another little one for me? I know there are sweet women out there either aching for that first one, or aching for another and it isn't happening.  It hardly seems fair.  My cup runneth over with children.  I have been blessed in that regard.  But, my cup does not runneth over with finances and means.  We always have "just enough."  I see our neediness.  I think sometimes God gives us or does not give us what we think we need for that reason.  If Josh and I could do this as a result of our own human efforts we would not need a great God.  He keeps us in a state of need and we remember our reliance on him. For every "I can't" I have been telling myself I am reminded He can.

And so, as we head into Christmas season, I have found myself dwelling on what had to be the most unexpected pregnancy in the history of the world, Mary carrying Jesus. I have been thinking a lot about her response recorded in Matthew 1:38,
"Behold, the bondslave of the Lord; be it done to me according to your word."
It is such a quiet, humble, accepting response.  How I want that to be my heart when the unexpected arises! God is obviously still working that out in me, or I think He wouldn't go "off-roading" on my plans so often.  So, here I am, 17 weeks pregnant this week, looking forward to a December 27th ultrasound to find out who this little one will be, counting down to a May 14th due date. Who knew?

"Don't hold too tightly to any one season of life, but realize that God is writing the whole story.  He has the whole big picture, and He is the one who is weaving it together to bring glory to Himself."
~Nancy Leigh Demoss

I have always loved Mary's response and I love to see how God is at work in your heart and life as He guides you along this surprising path!! You will have another precious one to love and a great chapter(s) addition to your upcoming book. ;)

Congratulations, I think you are perfectly normal for having 6 blessings. In fact, God says Blessed is the man whose quiver is full. This new wee one is coming into a home that has everything he or she will ever need. Love, parents that love God and each other, and 5 siblings that will adore this new sister or brother. God is GOOD, ALL the time! So blessings on you and your dear family! Carolyn

Oh, Sweetie! I was hoping for this kind of post soon. :) Thanks for sharing your heart, and all the details surrounding this humongous surprise. It's encouraging that you remind yourself of God's sovereign plan. I'm looking forward to watching the Lord work out all these things--the van situation, etc. And how wonderful it will be to look back on this someday and see the Lord's loving hand in all this.

...and you TOTALLY deserve your own reality show! NOT because of freakishness, but because of AWESOMENESS. ;) Love ya, Dear.