It was December of 2008 that Josh had a sudden revelation when sitting inside an elementary school, dropping off Isabella for speech.  He wanted to be a teacher.
And amazingly, I didn't tell him that was crazy or that it was too late for that.
I thought, yes, that makes sense.
I thought he would be a good teacher.
In a month's time he got himself registered and began taking under-grad science classes.﻿ 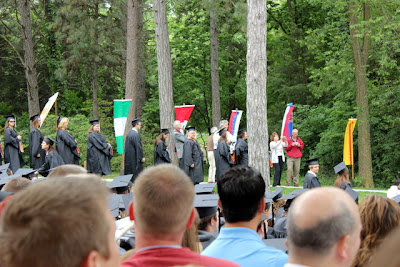 He balanced full loads of classes while trying to piece together enough income from two different jobs to get us by.  He worked furiously to get himself through school in the fastest method possible. He and I were ships passing in the night, I often in bed before he got home from work, him often leaving before the sun came up to get some extra studying in.  It was not easy.
Last year he was able to get his teacher certification and a paying teaching job. 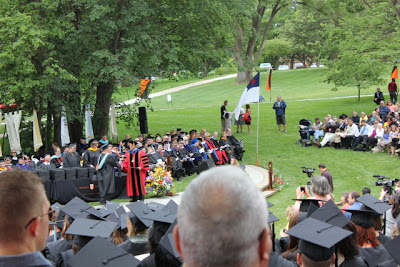 And yesterday he officially completed his masters degree in education.
I am heart-bursting proud of what he accomplished! 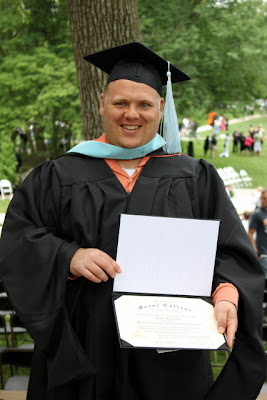 He loves teaching.
Sometimes there is this wistfulness, "Oh, if only he had started out on this teaching path from the get-go . . ."  If only he hadn't gotten a major in business finance and done all those sales jobs we could have avoided all the searching and heart ache.  We would be further along.
But we both know how those experiences shaped him.  If he hadn't been given those experiences and the failures, if God hadn't stripped away our income . . . The hunger for a job in education would have never been there.
The door-to-door sales he did made him someone completely at home in front of a group of people--someone who never gets nervous.  He deals well with people from all walks of life.  The overgrown kid in him and his passion for science draw in even the most uninterested students, getting them excited to learn (I know this because they write him letters telling him how much they love his class!). He is so happy in his job--finally he is just not bringing in an income, he actually has a career.  Josh started this job with a wealth of life experiences that he wouldn't have had if he had become a teacher at 22.  It reminds me how God's ways are so much better than our own.

Josh might not be done with school yet . . . he has to wait another year, but then he can start a second masters in educational leadership--in the event some day down the road he wants to become a principal.  And he also laughingly told me that he wasn't going to get a doctorate but after seeing the cool robes they got to wear at graduation, he is reconsidering . . . ;o)
His mother and I laugh . . . Josh spent his fair share IN the principal's office during his growing-up years.  Who ever would have thought he'd become this life-long scholar?
And I remember that God knew, all along.

Mostly, though, I'm just thrilled at the example he is being for our kids. They got to see him work hard at something and achieve it.  You're never to old to get a do-over.  God is so gracious. 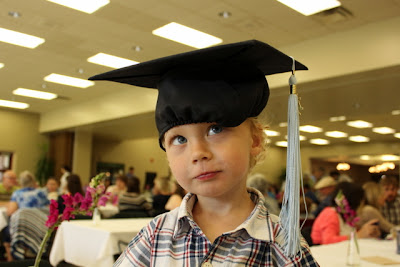 so happy for you guys! God's timing is wonderful indeed. :)

Thanks Janna you are way to kind. We both know the one who made this possible. Thanks for all of your hard work!

And the fact that you are proud of him probably means more than any diploma out there!! Congrats to you both for making it down this road and seeing how the Lord has been at work all along.

Oh, CONGRATS!! --to all of you. It was an all-out family effort I know. I'm excited to see his giftedness in this area...it's such a good thing to be enjoying one's job. Way to go, Josh! (And JANNA!!) Behind every great man...

A dream is never impossible when God is in it! A big congratulations to Josh! And you earn the "praises at the gates" for keeping the home fires burning while Josh worked and studied. You are a "True Woman" Thanks for sharing this amazing journey with your blogger community! Mimi