(For all those Hansen girls) ;o)
This isn't so much a tutorial, but more "a few things I figured out by trial and error" should you attempt to make one.  As I said earlier, I found the necklaces here and loved the pop of color they would bring to an outfit, kind of like a big funky bead necklace. But I wasn't willing to cough up the $41 for one and so I started googling rosette tutorials, and this one seemed to most be the look I was trying to achieve.
What I used to create my necklace--
~About 1/4 yd of material will easily yield you enough fabric for two (maybe three) necklaces
(Kona cottons come in an array of colors, like these)
~An 18 inch chain (found in the Hobby Lobby jewelry section) that already had all the fastening pieces attached.  I ended up using a wire cutter and snipping my chain in half, and then snipping another 1 1/2 inches off of that.  I'm wondering if it might be better to just use a longer chain and then there would be no snipping involved--just attach the entire chain to the back of the rosette piece
~Some wool felt that I just happened to have lying around that matched perfect (to back and secure rosettes)
~Super glue for securing the ends of my chains to the outermost rosettes
~Fabric glue for securing the rosettes as you roll and twist, I used this kind from Hobby Lobby: 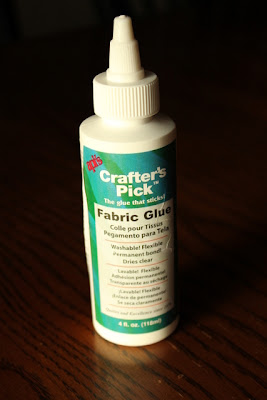 While it did dry "clear" it did not dry invisible.  I considered a hot glue gun, but I'm thinking you would end up with "webby stuff" all over the place. 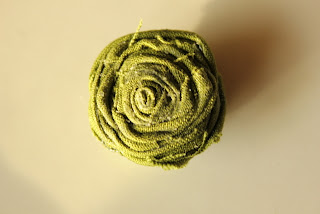 It's not terrible but I didn't twist the fabric enough as I wrapped it around (I was a bit afraid to have the raw edges show and kept trying to hide them) and I got the glue too high up while I wrapped.  When it dried I could definitely see glue all over the place (it doesn't show up that well in the picture, but it did in real life). This one was demoted to a Barbie play thing. ;o) When I went to do the next one I was more careful.  I squeezed the glue out first on a paper plate and then dipped a cue-tip in, carefully dabbing glue closer to the bottom of the twist and trying to keep it from squeezing out the top.  By about the 4th one I was on a roll.  Ha--literally. ;o) 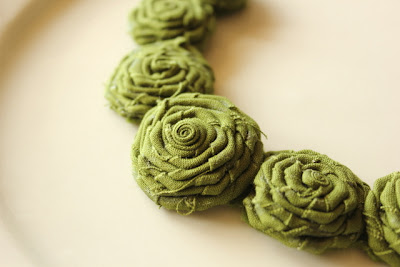 I decided to do seven rosettes instead of the original necklace's eight--I just liked having a center.  That rosette was the biggest and probably right around 22 inches in length (before rolling the strip).  When I cut my strips I left them as long as the fabric was wide and then just cut the extra off when I got the rosette to the size I wanted.  I wouldn't cut the length before hand just in case you end up wrapping one a bit tighter and need more length to get it to the correct size.

Once all the rosettes were done I played around with arranging them in a curve and tried to find places on each where they would overlap a little an not leave space showing underneath.  I then glued them to the felt and trimmed the felt so you couldn't see it. 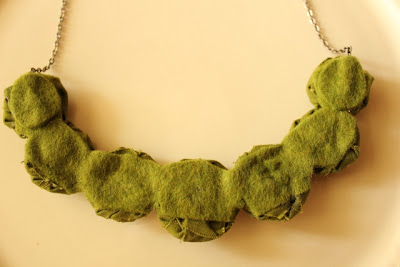 I super-glued the chain ends to the back of the end rosettes--you can kind of see the lump underneath the felt?  After that dried I cut felt circles and glued them over the chain ends.  I'm not sure if that was the best way to do that, but so far it has held fine.  I'm wondering if I had originally gotten a longer chain I could have just ran the chain along the length of the rosettes and then there would have been no need for wire cutters.  I may try that next time around.

Hopefully that is a little bit helpful? A bunch of step-by-step  photos would probably make my instructions more clear, but I'm not talented enough to twist and glue and photograph at the same time. ;o)  When all said and done I easily had less than $5 in the whole necklace, so I was pretty thrilled with the result on all accounts!
Posted by Janna at 7:56 AM

Thanks for sharing. Hopefully a creative member of the family will do it. You make it look so easy. Mimi

SO GORGEOUS, I definately have to try this...and that green color looks amazing on you! :) TFS, my crafty friend.

This Hansen girl thanks you. ;-)