Running--42 miles . . . a little bit more than January, which surprised me since the first week or two of February I was kind of hit/miss (the snow and all . . .).  I've officially started a training regimen and this month saw the addition of 3 and 4 mile runs.  I finished off the month with a 4-miler. I drove myself a nice little gravel route complete with some *lovely* hills and really large footprints from some sort of four-toed animal.  Four miles is doable, but once I'm done I constantly wonder, "How will I ever do thirteen!!?!" I don't run with any music (I figure I don't need to add to my hearing impairment) and instead found myself composing this little number:
"I am Sweaty"
(sung to the tune of "I Feel Pretty" --Westside Story)
I am sweaty, oh so sweaty,
I am sweaty and so very red!
And it's a pity, that this hill makes me feel quite dead.
La-la-la-la-la-la-la-lalalaaa!
Who needs a running play list when you have a sweet little ditty like that running through your head? ;o)
Reading--technically I only finished two books, Washington's Lady by Nancy Moser and Wonderland Creek by Lynn Austin (although I have two nonfiction ones I'm slowly plugging through--one about homeschooling, one about photography). I enjoyed both of them--Wonderland Creek was my favorite with all of it's literary references and the gentle fun it pokes at people who like to read. Then there are  the kids--over the course of January and February they have really been hitting the books hard-- 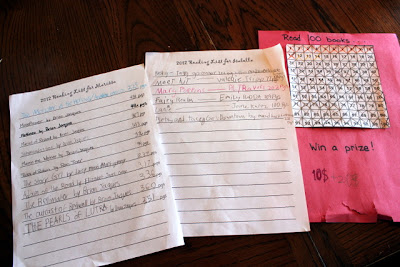 Marissa has been on a "Redwall kick"--she has read over 4000 pages.
Isabella has been steadily going, and lately it seems her reading pace has picked up--over 800 pages.
And Jackson, with the lure of a Lego prize to read 100 (Bob) books, officially completed his goal today!  I never thought I'd hear him ask, "Can I read you these 12 books?'  But it is music to my ears.  We changed his prize to $10 to spend at the Lego store in Denver (although if you look closely at the red sheet you'll see he penciled in a suggested $20 reward if we felt so inclined). ;o)
Watching--part of the reason I didn't read very much was due to the discovery of Downton Abbey.  LOVED IT!!  I watched season one on Net.flix while Josh was gone for state wrestling.  I then decided I would not be able to wait until season two hit Net.flix and watched all of them on my computer.  How will I ever make it until next year for season three?  Josh and I are still making our way through Bones--I think we're in season five now.  Josh likes it for all the science stuff.  Me?  When will Booth and Bones realize they love each other?!?  I've never seen a show draw out a relationship tension like  this one does!
Listening--aside from Psalty and Suzuki?  I've been enjoying this--

I must say it made excellent background yesterday on my drive to Kearney, through wind and rain and rainbows!  (And tornadoes . . . not that I had to deal with that though!)  I really think spring came early.
Crafting--I pulled out the sewing machine this month to work on a few doll dresses and a tote bag.  I have lots of little projects cut out, but I haven't made very much progress.  The last two days I've spent organizing my 2011 photo album.  I've got all the pictures in!! I think I'm really (really, really!!) going to enjoy Project Life.
*****﻿
I must conclude this is the best February I've had in a long time!  Usually February is so blah--but school-wise we're still going strong and the winter was one of mildest ones we've had in a long time. No sickness, no major bouts of cabin fever--yippee!! None-the-less we're all looking forward to the fun that spring will bring. ;o)﻿
Posted by Janna at 7:32 PM

WOW, way to run! (And even composing your own theme song--I'm inspired.) Calvin has the SAME 100 chart he's filling out with his BOB books...although we're moving pretty slowly. Love all the other tidbits, the crafting--YAY for a great February! :)

I cracked up at your running song. Especially because I'm sitting on the couch still a little sweaty and red from my own (much shorter) run. :-) I wish there was a way to get in shape for running without actually having to run...

Glad your February has been so pleasant! Bring on spring!