The afternoons have been spent doing a bit of this-- 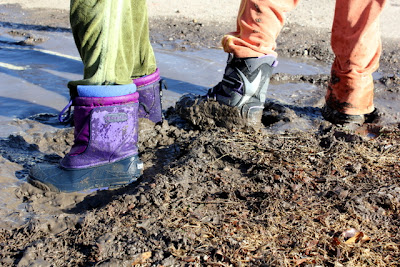 Consequently, I have quite the pile of excessively dirty laundry this evening.  Not at all helped by the fact Jackson ended up with three clothing changes.  After burning through his jeans, he was quite distraught to discover no more jeans to wear when we went to the park.  I told him it would be okay if he wore a pair of dark khaki cargos that we normally reserve for church.  It took 20 minutes of sobbing (on his part) and "WEAR THESE PANTS!!" (on my part to) get us out the door.  You see, it is incredibly embarrassing to wear church pants to the park. MORTIFYING.  I won that battle though . . . Although he did disregard my suggestion for a more casual shirt and opted for a dressier sweater (it would also be so embarrassing to be caught in a casual shirt while wearing "church" pants . . . if we're going fancy we're going fancy all-the-way!).  Oh, that boy.
We were heading over to the school playground so that I could use the track to run.
You see that chain-link fence there? 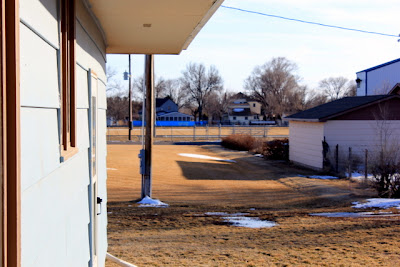 That's the fence that goes around the school track.  I'm standing on the back stoop of my house taking the picture.  All that to point out, it is really close and convenient.  And while I put in my 12 laps (which didn't end up feeling quite as tedious as I though it would!) the kids played on the playground, also located within the fence.  It was nice to have a little cheering section of "Hi Mommy!" as I completed each round.
The fresh air was good for all of us and we returned home to enjoy some sort of red bean/smoked sausage soup (it started as an actual recipe but kind of evolved from there--kind of similar in flavor to a ham/bean soup) and some fresh-out-of-the-oven cornbread. 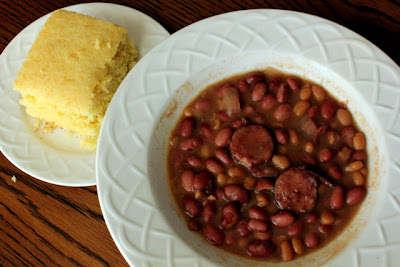 Jackson and I had another discussion about finishing the beans in his soup.  You see they were "cracked" which made them ugly and gross.  I tried to explain the whole soaking beans process which satisfied him enough to take a few more bites.
However, in our hurry to eat our cornbread I didn't give it sufficient time to cool, and in spite of hot pads ended up with this on my table-- 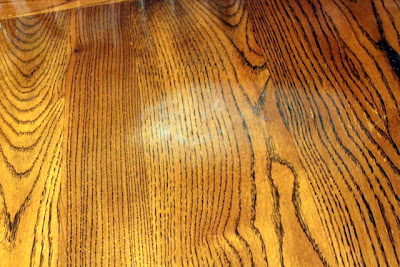 That white-ish spot?  Not supposed to be there. :o(  I did find a you.tube video demonstrating rubbing ashes into such a spot and removing it.  At the moment I am lacking in ashes, so I'll let you know if that works.  In the meantime I am rather mad/disgusted with myself.  Anybody else have a miraculous cure for me?
The evening rather disintegrated from there . . . the girls' shower drain plugged and began leaking into the basement, I dropped a light bulb from the dining room fixture, shattering it across the table (poor table is not feeling the love tonight), Owen broke a jar . . .  Can you tell my "relief crew" is missing?
But we're redeeming it all . . . Sound of Music part one now playing.  It felt about time to watch that again--just never gets old, you know? We've just reached the part where they're wearing their curtain clothes. ;o)
Posted by Janna at 7:29 PM

Oh I LOVE Sound of Music!! The muddy puddle stomping looks fun (for the kids, not 'after' party in the laundry room...) And what a great set-up to jog while the kids are playing! Good for you, marathon mama. ;)

And since you've met an above-average quota for breakage, maybe you'll have a dry spell for awhile...I hope.

Bless your heart!!! Sounds like it's time for your favorite wrestling coach to be done with the wrestling season. :) Hang in there!

Wish I had a great tip for your table. Try looking on the Queen of Clean's website. She's got *tons* of great tips on there!