A little art project we did today (idea found here). 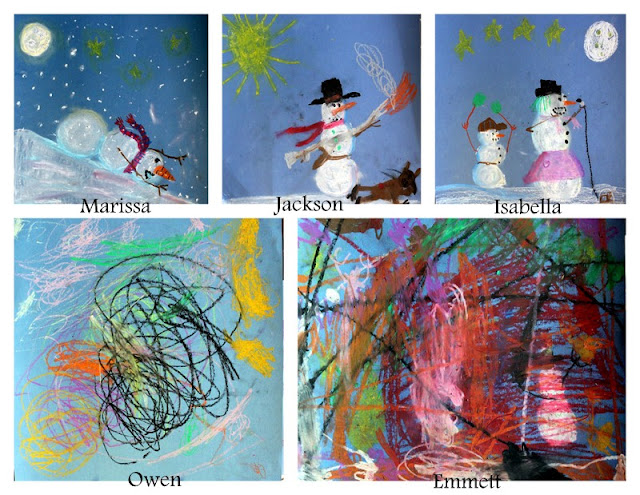 If you're familiar with this book--
Then maybe you'll recognize the inspiration behind (some . . . ahem) of the drawings.
I tried to have them do some shading like the directions said, to show the side that would be in the shadows, and also have the snowman doing something interesting.
What we ended up with:
Marissa--a snowman sledding down the hill on his belly
Isabella--a snow-woman singing into a microphone with a snow-baseball player who appears to be perhaps dancing?
Jackson--a snowman literally holding a smoking gun after shooting a bear (and he poo-pooed the idea of a moon, he wanted a sun, so not technically a snowman at night  . . . ) ;o)
Emmett--his actually started out with some cute little multicolored snowman wielding swords (I swear we don't watch or participate in violent things!!) and then there were a few planes (one which poked a snowman in the bottom . . .) and then this "red lava" came and covered everything up . . . and well after that, it was just layer upon layer of color.  He spent a good 1/2 hour longer on his picture than anyone else (not that you can tell by looking . . .).
Owen--he said he was drawing snowmen, so we'll go with that ;o)
All in all a fun and fairly simple project to fill an afternoon that has Daddy gone to a wrestling tournament (but yay he's home tomorrow!).
Posted by Janna at 7:11 PM

I love their drawings! Great project!

These are SO cute, I love how animated they are. What a good January activity.

LOVE "Snowmen at Night"! At least your gun-drawing little ones are boys...how I ended up with a three year old girl obsessed with monsters, bad guys and fighting, I'll never know. :-)