Two years ago, pregnant with Owen, I sat down and worked on a perpetual menu, a binder to hold the go-to recipes, and grocery lists saved to my computer that I could go and print off whenever the grocery-shopping whim struck me.  It truly was a life-saver and a time-saver while Josh finished up school.  We would usually do a huge monthly trip, working it around a day where he would have time. We'd all head off to Walmart and three carts or so later we'd return home.  It worked great.  For that period of life.

I've been trying to make that same plan work here, but it's just not cutting it.  My closest (and least favorite Walmart) is half an hour away.  The one where I do most of my shopping (Kearney) is a full hour--and yes, I bring coolers and put as many perishables on ice as possible.  Usually, the only time we go into Kearney is on Tuesday for violin lessons.  We tried all of us making the trip--dropping the girls at lessons, jetting across Kearney, me giving Josh half the list and I taking the other and zooming through Walmart during the 5:00 hour.  We did set a grocery shopping record (two weeks of groceries completely through the cashier in 40 minutes is brag-worthy, is it not?) but we also ended up five minutes late retrieving the girls from lessons (and even though it was just a few minutes, I felt terrible).  Josh informed me he was really hating Tuesdays, teaching all day, long drive to Kearney, crazy grocery store, long drive home, and asked how about he keep the boys and just the girls and I go? The last few weeks I've done that.

But now, wrestling season is starting . . . I've lost my "boy sitter."  :o( And while I will still probably do my weekly grocery shopping in Kearney, I'm going to have a lot of "help."  That means it is time to S.I.M.P.L.I.F.Y.--I will only shop for one week of groceries at a time.  And so today, I started tweaking things a bit and came up with this nifty six week menu grid-- 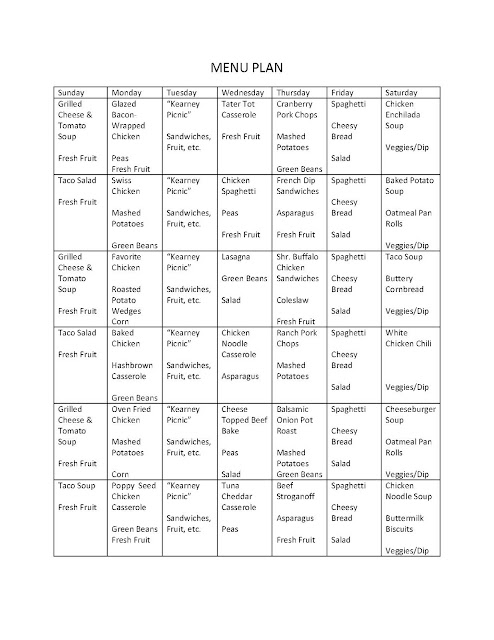 And let's get honest, anything organized neatly on a grid reduces me to a puddle of giddiness and makes me feel oh-so-competent. ;o)  Next up, I'll be typing up the (now smaller) grocery lists and then
VOILA!!!
Six weeks of menus literally at my fingertips--at a more doable once-a-week-with-five-kids-in-tow pace!  Now to convince the almost two year old that the shopping-cart-seat-tightly-fastened-in really is THE BEST seat in the house.  And also "No, we have to pay for the bananas before we eat them."  Certainly my winter shall be filled with many a calm grocery shopping experience . . .  Right??
If only a grid were *that* magical. ;o)
Posted by Janna at 8:26 PM

Great problem solving, Janna! ...that grocery shopping can be quite the time consumer (but oh SO necessary)...especially coupled with your drive and lack of husband. Hope you have some happy winter food shopping for a family of 7! ;)