Jackson has decided to become a pirate and crafted himself a fleet of ships: 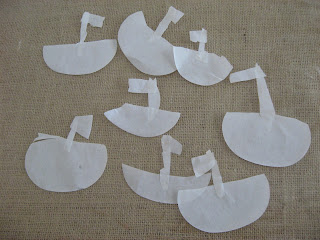 (This is his first foray into the realm of cut/paste--and before you find yourself amazed with his smooth bottomed ships, realize he stole Isabella's snowman notepad, and what you see is the bottom belly of a snowman) ;o)
~~~
What nine months of toys being thrown down the stairs looks like while being repaired: 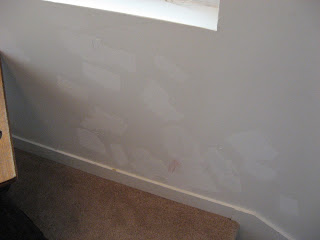 I laughed when I saw Josh's "first coat" of spackle. Sadly this isn't the only wall getting such treatment (although it is probably the worst of the lot).
~~~
Reading time with Rissy: 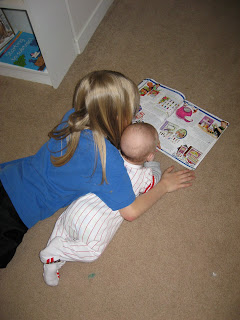 I'm collecting myself a nice little stack of pics of Owen in her lap, Owen laying next to her while she reads aloud to him. So sweet.
~~~
And Josh has one more day of this semester left . . . one more final . . . and then we'll all be breathing a bit easier. We've just about nearly survived this nasty spring semester--we will spend the rest of May celebrating. ;o)

How sweet! Marissa is SUCH a good big sis. ..and LOL at the spackle! ;) ..and sounds like Jackson has big career plans. :) YAY for this semester ending!!! :)