The Gift of a Day

Today dawned with me determined to ride out the cleaning frenzy I had begun the day before. On the agenda--a thorough tackling of the upstairs bathrooms. I was looking forward to it . . . which truly doesn't happen all that often, so when it does I definitely take advantage of it. ;o)

It seemed like a good plan. It was number one on my list, but in the end it wasn't what God would have me focus on today. Yesterday, Marissa had been complaining of a sore throat, and I had been hoping she had just caught the cold I had last week. But, as our morning progressed it was obvious she was in a lot of pain. I encouraged her to lie down and rest, but she just kept following me around, whimpering, sniffling, and obviously needing my attention. So, I stopped what I was doing, and remembered a quote my friend Kathy recently had on her blog--which I'm cutting and pasting (hope you don't mind!). ;o)

"Every day that dawns brings something to do, which can never be done as well again. We should, therefore, try to do it ungrudgingly and cheerfully. It is the Lord’s own work, which He has given us as surely as He gives us daily bread. We should thank Him for it with all our hearts, as much as for any other gift. It was designed to be our life, our happiness. Instead of shirking it or hurrying over it, we should put our whole heart and soul into it." ~ James Reed

I was shirking and hurrying over the care Marissa needed at the moment. Instead of cleaning, I drew her a bubble bath and let her soak, found her some comfy clothes for lounging in, braided her hair, and called our doctor's office and got her a 2:10 appt . . . which meant the boys would miss nap time . . .

While I did these things, unbeknownst to me, Isabella prepared a little tray for Marissa with orange juice, paper/markers, the current book she's reading, her "missionary journal" (which I'll have to tell you about another time), and a thermometer. *smile* Not only that, but she gave up her own bed so that Marissa didn't have to be way up near the ceiling and forgotten about. (This was so me as a girl--I hated being up in my bunk bed, sick, and all by myself, I always convalesced on the couch in our living room, in the midst of the action). 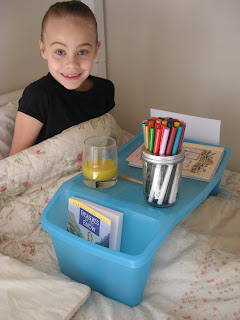 Marissa was in much better spirits after all the TLC. And Isabella was praised heartily for being selfless and showing such care for Marissa, an area that Isabella struggles in. I don't know about you, but a moment like this comes few and far between, and it was the bright spot in my whole day.

(Because I ended up waiting a good 45 minutes for the doctor, with five kids in a tiny room. Owen pooped up his outfit. I had forgotten a spare. Marissa has strep. Emmett was upset he didn't get weighed. I convinced Marissa to go with a penicillin shot in the rear instead of a ten-day course of antibiotics. She got so worked up she threw up a bit. She still hates me for it. We all celebrated by squeezing in a huge grocery shopping trip at Wal.mart on a Saturday afternoon (where Josh met us after finishing work). I hate crowds. And I REALLY hate maneuvering two full carts and a smattering of children through throngs of people.)

I'm pretty worn out. But I keep reminding myself that 'THIS was the day the Lord had made' I wish I had something tangible to show for it (like shiny bathrooms), but obviously He had other plans for my day. Even in the humblest work I need to persevere at doing well and delight in the blessings found there--like a six year old adopting a servant's heart. In the end, it is a day well spent.
Posted by Janna at 8:11 PM

Oh, Janna. You are such a good mommy. You remind me why I love being a mom so much! You were definitely a Proverbs 31 kind of woman today!

I can learn from Bella. What a sweetie.

Aw, what a tough day...but a day well spent like you said. Bless your heart, hope this week goes well for you!! (and btw, if you still need a mommy morning on a Thursday..even just to clean alone a little...let me know!) Praying for a quick routine to normal for you all...