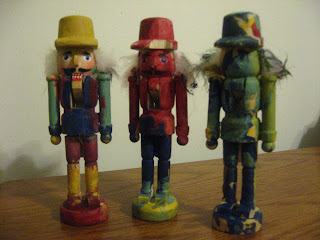 There are four, but Isabella's has gone AWOL, having not yet returned from a "hay rack ride" earlier this evening. The original plan was to paint wooden ornaments, but we saw these at Hob.by Lob.by, I think I got them for less than $1 a piece, and they already had faces painted on. For some reason my kids LOVE nutcrackers, so change of plans. And the boys particularly have had a blast with them--which is why Jackson's already has a chip in his hat. ;o) They built them houses out of blocks, had them driving tractors . . . all sorts of great fun. And if you are still looking to do any Christmas crafting, my goodness are stores starting to clearance their stuff out! The Valentine's stuff is already moving in!
Posted by Janna at 8:59 PM

What a cute idea! We love nutcrackers too...and love that the kids got so into them...you have an endless stream of creative ideas, love it.