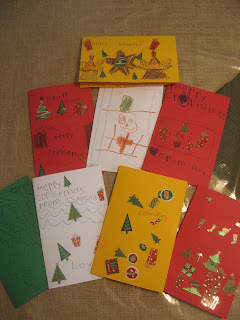 Simple, painless, and yet this small pile of cards probably kept them happily busy for about an hour. I rummaged up some card stock and folded it in half, and then gave them crayons and Christmas stickers. REALLY easy. But now we have some "from the heart" cards to disperse. ;o)
Currently everyone is watching "The Polar Express" and eating popcorn. It is still supposed to be nap time for the boys. But lately we have been having some issues at nap time. It would seem Jackson is beginning to outgrow his three hour nap, because the last three or four days he hasn't taken one. And the last three or four days he has slept in until--are you ready for this--6:45! :oP Something is not adding up there. But then, Emmett has been arriving in my room somewhere in between 5:30 and 6:00 these last few mornings and climbing up between Josh and I. It's like they flipped or something. Baffling.
And lastly, some recipes I have wanted to share, the first one being for some cranberry muffins that are really, really yummy. There is a suggestion on this recipe to omit the pecans and throw in some white chocolate chips instead. And yep, that is a tasty suggestion. ;o) Head here for that recipe. And the second recipe is for a fun little twist on the whole almond bark/pretzel phenomenon. I did something similar for Valentine's Day and now I'm looking forward to trying out this Christmas version--and it's SOOOO easy, but looks so cool. Head here for that idea.
And I'm doing okay--just trying to ignore the fact there is still a baby in there and keep busy. ;o) I still have Christmas shopping left to do. I had hoped to be been done long ago, but in the end it is nice to have something to keep my mind occupied with. I'm trying to finish up some felt "kid ornaments" but that has proved to be slow and tedious with these silly numb fingers. So many little things you take for granted when everything is working properly! Overall, December has gone crazy fast, and each day is one day closer . . .
Right? ;o)
Posted by Janna at 2:29 PM

What beautiful cards! And WOW those recipes look amazing, I am a big fan of cranberries...hope you're having fun of the last days (probably ever?) being pregnant! ..you'll be glad to have full circulation in all your appendages.. but the felt ornaments sound so cute! :)